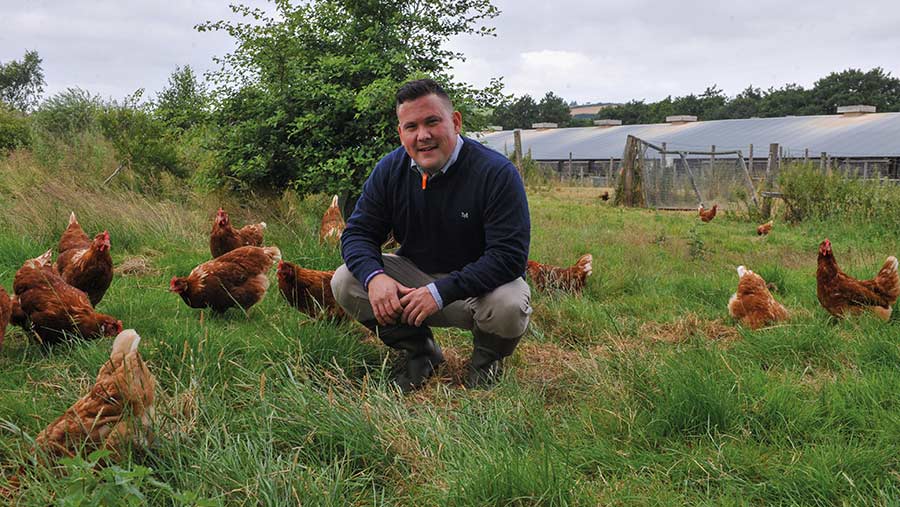 Tim Clarke has introduced controls on his 9,000-bird unit at Nantywellan, near Llandrindod Wells, to reduce fly populations.

The flies are known carriers of diseases such as salmonella, pasteurella, campylobacter and E coli, which can disrupt flock health.

As an organic producer, he needed an alternative to a chemical control. But he insists that because the method is so effective – with no nuisance flies in sheds at all last summer – he would have opted for natural fly controls whatever farming system he was operating.

“Everything we do here is done as close to nature as possible – if there is a natural means of controlling flies then as farmers we should take it,” he says.

Mr Clarke enlisted the help of an expert in biological pest controls to survey the site in spring 2021 and to draw up a plan of where the parasitic wasp pupae needed to be distributed.

See also: 10 reasons for poultry carcass rejects and how to avoid them

Parasitic wasps are the natural enemies of flies but do not bother animals or people.

“The expert calculated how many we needed for 9,000 birds in three sheds across the summer and worked out a plan from that,” Mr Clarke explains.

The pupae arrive every month by courier, packaged in sawdust-filled cardboard tubes.

These are interspersed around the poultry sheds in the areas recommended in the plan, including through the slats on to the poultry manure.

The wasp that emerges is the size of an ant and, as a parasitoid, it lays multiple eggs into the nuisance fly pupa.

The wasp larva breaks out of its host’s abdomen, killing it in the process and preventing the adult from hatching.

Why timing is critical

Mr Clarke stresses the importance of acting early, before the summer, to prevent the fly population from building as the life cycle of a fly speeds up in warm weather.

After hatching from the egg, there are three maggot stages before the fly emerges.

In cooler temperatures it can take four weeks to get from egg to fly, but in hot temperatures that can drop to just seven days.

“By getting controls in place early, we stand the best chance of successfully controlling flies,” Mr Clarke says.

The larvae hatch in the warm, moist conditions of the manure build-up. Once they are mature, they mate and inject their eggs into more fly pupae. 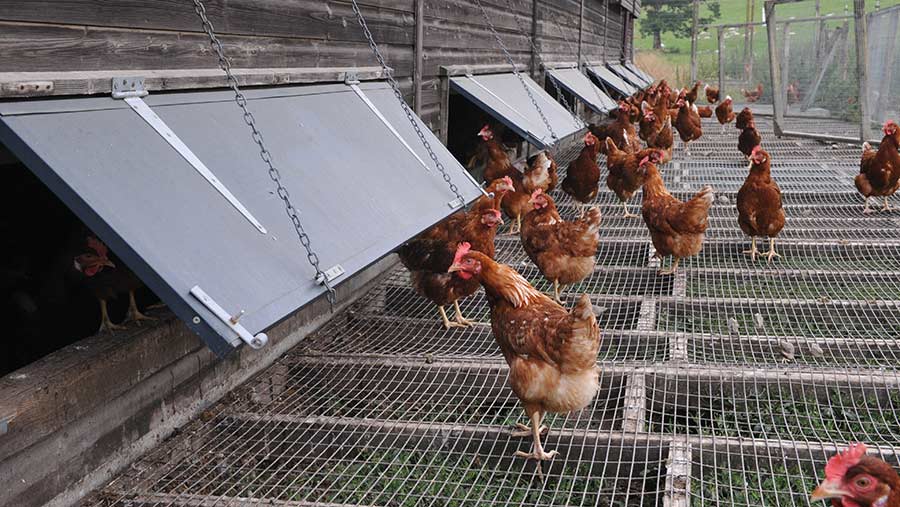 They remain below the slats, and once the temperature drops below 15C, they gradually die off.

Every site requires a different approach according to house structure, bird numbers, age of flock, and specific fly issue.

The controls cost Mr Clarke about £500/year based on 9,000 birds, which is slightly higher than chemical controls but still comparable.

Because the business is only in its second year, it is not yet possible to say how the economic payback compares to an alternative system.

But he says any extra costs have proved to be worth it. “We didn’t have any flies last summer, even though as a free-range unit flies can come in and out of the shed.”

Mr Clarke is convinced the health improvement combined with the reduced numbers of biting flies has been a factor in supporting bird performance. “The birds are very content and happy and laying well,” he says.

The previous flock averaged 315 eggs over a 76-week lay. He depopulated the sheds in May and the second flock is now in place.

Parasitic wasps only work against fly pupae so this summer Mr Clarke is using a different method to control adult flies in the packing room.

“We had nuisance flies when we were packing eggs last summer, buzzing around our heads, so for human comfort we are using fly buckets to trap them,” he explains.

The bucket is positioned outdoors in direct sunlight and contains a bait solution that is designed to attract adult flies, trapping them in the liquid.

All the natural control measures are in combination with adequate manure removal and using high-quality, absorbent litter that is regularly changed.

“It’s a whole package of measures,” says Mr Clarke. “If you get the environment right to prevent those flies from breeding in the first place then there are fewer to control.”

The speed of fly reproduction can vary depending on environmental conditions, such as warmth, moisture and food sources, but it is not uncommon to have up to six generations during a single summer breeding season.

Fly control expert David Reece says only 20% of the fly population can be seen – the remaining 80% are at the egg or larvae stage, so it is important to remove or minimise breeding sites.

“Removing that opportunity for breeding is critical or the cycle will just continue and fly numbers will become difficult to control,” says Mr Reece, director of Oakwood Farm Services.

Above all, monitor fly populations, Mr Reece advises. “If there is evidence that fly numbers are growing then you know you have got to do something about it; if not then you are better off keeping that money in your pocket.”