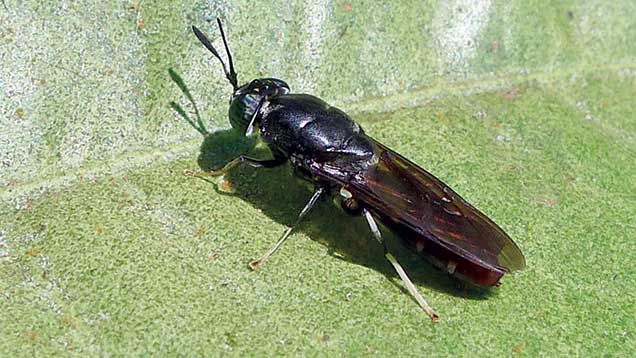 It’s been said that a single pair of breeding flies could produce enough offspring to cover the globe to a depth of 47ft in less than six months, given unlimited food and no mortality. On the face of it, then, insects offer a tantalising alternative to importing soya for animal feed.

They can convert waste products, such as blood, into a tasteless, protein-rich powder that can exceed the nutritional qualities of pulses in some instances.

But industry still has several barriers to cross before the average farmer could consider mixing bugs with barley, and feeding them to poultry. Tristan Bennett, a student at the Royal Agricultural University, chose to look at its feasibility for his masters project, now published.

“There is huge potential for further research and field tests to identify and experiment with the use of different insects in animal rations,” explains Mr Bennett. “When considering insects as a foodsource, the livestock’s natural feeding habits should be considered – larval and pupal forms of insects are naturally consumed by free-range poultry.”

A key area to consider before any chicken might be chowing down on flies is their type. Different species have differing protein levels, and the amino acid structure can also vary wildly.

Protein is composed of amino acids, and of primary importance are lysine, methionine and leucine. Here the potential for insects in feed rations really begins to look attractive; some insects, including the housefly, have higher methionine levels than fishmeal.

These figures are relevant as feed compounders will often add expensive nutrients to rations to make up the inclusion quality when mixing feed with soya.

“Also, the chitin, found in insect exoskeletons is believed to have a positive effect on the immune system, which could reduce the number of antibiotics required in the poultry industry,” he adds.

One study found improved growth and carcass quality in chicks fed insect protein as part of their ration.

A further point made is that the diet of flies can be adjusted, thereby altering nutrition.

Despite the promise that insect protein offers as an alternative to soya, or fishmeal, there is little in the way of a commercially scalable system to date.

But the potential market is large. Around 3.5m tonnes of soya is imported into the UK each year. “This illustrates that there is huge potential demand for insect protein if it can be produced in a cost effective manner once legislative barriers have been removed,” says Mr Bennett.

He points to a scheme set up in South Africa, Agriprotein, in which two UK entrepreneurs are forging ahead with making a commercially viable model for insect protein. They are working to scale up, and currently have a facility able to produce 17t of wet larvae a day, from 110t of organic waste. It represents the closest to a commercial system to date, and the company aims to eventually licence its technology to other countries.

The black soldier fly has four life stages (egg, larva, pupa and adult). Their eggs take 102-105 hours to hatch at 24C and, with appropriate conditions, can reach the pre-pupa stage in two to three weeks.

In one study, 1,200 black soldier fly larvae (BSFL) were put into 1,248.6g of fresh dairy cow manure (508g dry weight) and kept at 27C at 60-75% humidity in an open barrel. After 21 days the majority of the larvae had crawled out of the manure and the rest were removed. The BSFL were inactivated at 105C and washed before being dried at 60C for two days. About 70.8g of dried BSFL were produced and the manure was reduced to 273.4g.

To put this into a farm context, if one considers a dairy farm with 200 cows typically producing 558t of manure solids per year at the same moisture content, it is equivalent to 1,371t of manure.

Assuming the BSFL can be produced at the same rate as in the above experiment, then there is the potential to produce 77.7t of dried BSFL annually.

A further assumption, that the BSFL meal has a value similar to soya meal, with a similar crude protein content at £401/t, the larvae would have a value equal to £31,157.

This is only a very crude estimation and larger farm scale trials are required to test the practicalities of such an operation. However the figures do show that such an enterprise may be profitable provided a facility can be designed at a reasonable cost.