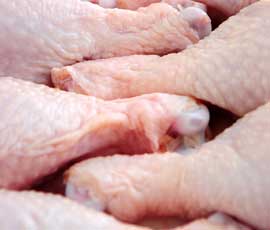 Traditional poultrymeat inspection does not fully address the biological hazards to public health caused by bacteria such as campylobacter, salmonella and ESBL/AmpC gene-carrying bacteria.

According to a report from the European Food Safety Authority (EFSA), current inspection methods do not detect these hazards.

Instead the EFSA has recommended introducing a comprehensive food safety assurance scheme, introducing new targets for what should be achieved in poultry carcasses.

It has also suggested using a number of control options at farm and abattoir level, and proposed collecting and analysing food chain information.

“One way this could be done is by categorising flocks in terms of level of risk and classifying abattoirs according to their capacity. Such information would also play an important role in identifying animal health and welfare issues,” said the EFSA report.

Based on pre-defined criteria, dioxins, biphenyls and the antibiotics chloramphenicol, nitrofurans and nitroimidazoles, were identified as chemical substances of high public concern in poultrymeat. But EFSA concluded that they were unlikely to pose immediate or acute health risks to consumers.

It added that control programmes for such contaminants should include new and emerging substances and should therefore be regularly updated.