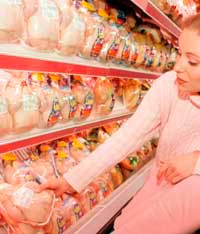 Poultry producers in the Irish Republic are furious over the loss of a state contract to Northern Ireland and are demanding that the deal be rescinded.

The Irish health service contract, for the supply of poultry products to Dublin hospitals, is said to be worth around €1m and had previously been held by a supplier in the Republic. It has now been awarded to Crossgar Foods in County Down, a decision described by the Irish Farmers’ Association as “totally unacceptable”.

According to its poultry committee chairman, Alo Mohan, a meeting is now being sought with Irish health minister Mary Harney in a bid to have the decision reversed. He accused the government of double standards. On the one hand, he said, it criticised as “unpatriotic” consumers from the Republic who did their shopping in Northern Ireland while, on the other, it jeopardised jobs and livelihoods in the poultry sector by allowing contracts to go to companies outside the state.

A similar dispute last year, when an Irish army contract also went to Crossgar Foods, led to producers picketing the Department of Defence in Dublin. However, ministers argued then, as now, that the contracts are awarded from an open tender competition and that they cannot intervene.