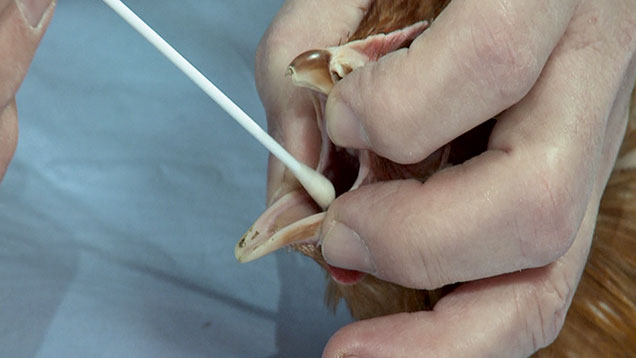 Taking swabs, as well as regular blood samples, and maintaining accurate records can help egg producers spot diseases sooner and so prevent them from further spread.

Identifying illnesses and understanding their causes is often challenging, says Alastair Johnston of the Minster Veterinary Practice, Garstang. “Egg production issues are one of the most common signs that something is wrong. But egg drops vary – from 1-2% down, to a major crash of 20-30%.

“It can be extremely damaging and frustrating to get on top of, because diagnosis can be difficult.”

According to Mr Johnston, the way forward to making sure disease is quickly and correctly identified is to take regular blood samples throughout the laying cycle, even if they are not tested immediately.

“The idea is to take blood samples when the birds first arrive, then at 20, 30, 40 and 50 weeks. You don’t need to test them all, but you should store them so you can go back to them to compare antibody levels. That way you will have a clue as to which virus is causing a problem.”

In conjunction with blood samples, Mr Johnston recommends egg producers work with vets to take swabs to look for the DNA of the virus in specialist labs. That way birds can be given the appropriate vaccines which directly target the virus.

Taking swabs used to be an expensive and experimental technique, he says. But the procedure has developed, making it simpler and more practical to use on-farm. It is a good way to quickly identify diseases such as infectious bronchitis (IB) or avian rhino tracheitis (ART).

“We would never recommend vaccinating on-farm unless you have specific evidence of a challenge,” he adds. “Rather than using antibiotics you should look for preventative strategies, which means good biosecurity measures rather than fire brigade strategies.”

Many of the most effective biosecurity measures are common sense, such as good foot-dips and hand hygiene, says Mr Johnston.

“We can pass on infection so, so easily. I think probably more important than overalls are hand washing and boots, although you should be doing all of them.”

And while AI prevention strategies are difficult in free-range systems, finding ways to keep wild birds and other animals away from standing water helps.

“Biosecurity is not rocket science, it is common sense that we all should be able to do. Stopping people coming on to your unit, using proper equipment to protect people and to protect birds from the people all play a huge part.”

Identifying AI and moving quickly is of the utmost importance, especially as the symptoms can vary, making it difficult to spot.

“There is a massive difference in mortality between species with AI,” says Mr Johnston. “With the outbreak of high-pathogenic AI on the duck farm in East Yorkshire last November, a colleague was called out because there had been a severe egg drop.

“We have seen a number of egg drops over the years, and in most cases the ducks look relatively healthy. But in this case food consumption had gone down and there was a huge crash in egg production – from 5,000 eggs to 1,800 on that day.”

The vet initially thought it might be egg drop syndrome, before suspecting AI.

* The above paper is taken from Alastair Johnston’s presentation to the recent British Free Range Egg Producers’ Association conference in Birmingham.