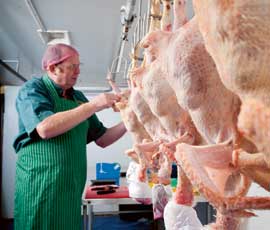 Market managers in Brussels have cut the last remaining export refunds for poultrymeat to zero, meaning all EU product for export now has to find its place in the world market without any taxpayer support.

It also means that, for the first time since the 1970s, the EU no longer subsidises any products at all for export.

“Twenty years ago EU spending on export refunds amounted to more than €10bn a year,” said one Brussels source. “Successive reforms of the Common Agricultural Policy have led to a more market oriented and competitive sector, and spending on refunds has fallen steadily.”

In reaching its decision to remove the last poultrymeat refunds, the EU Commission referred to the relatively high prices on the internal market, which have climbed 4% on average across the EU in the past year (with the notable exception of the UK).

And it pointed to the “foreseeable” reduction in feed costs and the “positive and sustained” upward trend of EU exports to third countries – up 4.5% in volume in the first five months of this year.

Provisional data suggest that, over the past 12 months, a total of 264,754t of poultrymeat was exported with refunds, which were available on frozen whole chickens to certain destinations, notably in the Middle East and the Commonwealth of Independent States.

France was by far the main beneficiary, accounting for 94.7% of the quantities exported and receiving 93.7 % of the €55m budget.

In the recent CAP reform it was agreed that the instrument of export refunds would be retained in future, but only for use in market crises.