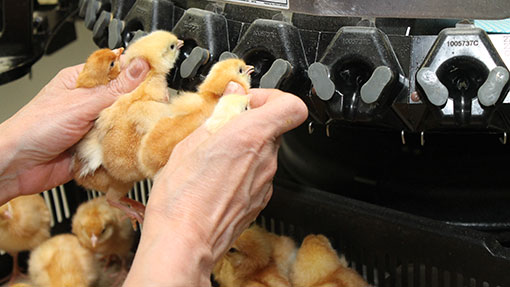 An all party parliamentary group of MPs has heard that the poultry industry is not ready for a ban on beak trimming in 2016.

It took evidence from a range of representatives, who agreed the welfare of hens would be severely compromised if infra-red beak trimming was banned.

The meeting heard one flock of 20 involved in the Defra-sponsored Bristol University trial had experienced total mortality of more than 40%. British Egg Industry Council described this as an “unmitigated disaster”.

Concerns were also raised of secondary causes of death, with one flock in the trial showing signs of bacterial infection caused by broken skin because of pecking. It was depopulated with mortality “in the teens”. In total, it is understood a quarter of the flocks had mortality rates above the 9% threshold set by researchers in the trial.

A third issue considered by the MPs was the speed at which a more docile bird could be bred. The consensus was that this would not be commercially available before the proposed ban’s date of 1 January 2016.

All but three of the 20 flocks put through the Bristol University trial will be depleted by the end of the year, the meeting heard. A report will then be submitted to government in 2015.

She suggested the majority of flocks in the trial had not had problems with feather pecking, which proved that it could be done. “But an awful lot of work, attention to detail and additional vigilance is needed to do so,” she said. “We need to put that in the context of commercial farming.

“[The RSPCA’s] goal is to reduce the behaviours that lead to beak trimming to such an extent that we’re comfortable without beak trimming. I don’t think we’re there yet, sadly.

“If the ban does not go ahead, however, we can’t simply rest on our laurels – we must push on. We can’t rely on a mutilation to run our industry.”