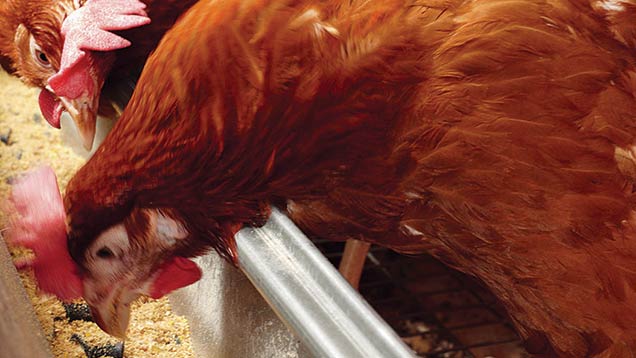 “The aim must be to ensure rapid development of egg production with good egg weight – and changing early lay nutrition can help with both of these,” says John Ward, poultry manager at Trouw Nutrition.

Mr Ward says that, where colony caged hens are housed at 15-16 weeks and come into lay two weeks later, they will typically reach 90% production before they are 20 weeks old, with peak egg numbers being achieved by 23-24 weeks.

However, daily feed intake can be slower to develop, especially in low liveweight pullet flocks, or flocks that are early into lay.

“It is not uncommon to find flocks are only consuming 90g of feed per day, yet are laying at 90%. As a normal intake should be around 115g/day, this means feed intake is only 75% of target.

“The result is that the bird is being under-supplied with nutrients, resulting in reduced peak lay performance, poor persistency and sub-optimal egg shell quality. One potential solution is to feed a diet specifically formulated for the critical first three-week period, which meets the nutrient requirements of the bird within the constraint of reduced appetite.”

Research carried out at facilities in Spain and Canada looked specifically at nutrient supply in the pre-peak period, and at feed structure.

The reduction in energy in the second diet offset the extra cost of the higher protein and associated amino acid content, such that this diet was only £2-£3/t more expensive than the control diet.

However, the trial clearly demonstrates that it is possible to encourage feed intake in low appetite hens by using a low energy feed and, by increasing the level of other critical nutrients, improve overall performance.

“The economic benefits of increased nutrient supply were considerable. Such a strategy may be usefully employed wherever low appetite is likely to limit performance in early lay hens in alternative farming systems, including free range or barn.”

Research also demonstrates the importance of the physical structure of the diet.

According to Mr Ward, the size and structure of the fibre in the feed has a positive effect on gut function, with fibre-enriched feeds improving feed efficiency.

“Increasing fibre content resulted in a well-developed gizzard which led to better overall gut function with better gut transit times,” he says. “This, in turn, results in increased feed intake and better gut satiety, while there was no impact on laying performance.

“Economically, the trials show there is an opportunity to reduce feed costs through the introduction of low cost structural components such as oat feed, sunflower husks or straw. For example, a 2.5% inclusion of structural fibre source to a layer feed could reduce cost by up to £1-£2/t.

“Interestingly, the birds on the fibre-enriched feed exhibited less feather pulling and pecking behaviour, suggesting a welfare benefit as well as an economic one.”

Maintaining gut health can also have a big impact on layer performance.

Mr Ward says that, while modern layers have tremendous production potential, they face a significant number of stressors which can mean the potential is not achieved. This is especially relevant at transfer to the laying facility.

“We now know that stress plays a major role in disrupting the gut environment and initiating health challenges,” he says. “Intestinal health is of critical importance for performance and cost of production.  Controlling intestinal health involves managing the relationship between the microbiota present inside the gut and the gut barrier function.

“For good digestion, gut health and animal performance, it is vital to have a stable and diverse microbiota. One option is to add a synergistic blend of organic acids to the feed to improve the microbial balance and boost intestinal integrity.”

In a farm scale trial in the UK a 32,000 bird flock split between two houses with a history of dysbacteriosis and focal duodenal necrosis (FDN), Selko Presan-FY was added to the diet of one of the houses. Inclusion was at a rate of 2kg/t from housing to week 18, and then the rate was reduced to 1kg/t up to week 30.

“Birds on the treated feed showed a significant response,” says Mr Ward. “The incidence of FDN was reduced and, while feed intakes were the same between houses, the treated birds had 2% higher egg production. In addition, bird survival was 1.2% higher.”

The combined effect of more eggs and less mortality outweighs the cost of the treatment, he says.