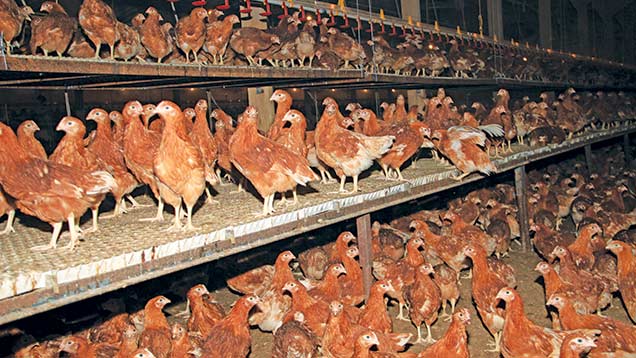 Getting to know your birds as quickly as possible will prove a long-term investment for free-range egg producers, according to Humphrey Feeds and Pullets sales rep Colin Gravatt.

As soon as the birds arrive, Mr Gravatt likes to see the farmer spending time with them: “It’s extremely important that the farmer walks the birds and observes them. The more they get to know you, the more settled they are and the more they move about the house.This can prevent floor eggs, which are so time-consuming and frustrating for the farmer.

“Farmers tend to find radios are useful tools to settle the birds – others get up with the birds. You know you have got them on your side when they start following you.”

Mr Gravatt, who has been with Humphrey Feeds since 2002 covering the mid-South West, said the times of feeding in the laying house should mirror those established in the rearing unit. “Feed consumption at this stage should be around 80g/day rising to between 95g/day and 108g/day by weeks 19 and 20,” he says.

“A key objective is not to have too much feed in the chain. You want to encourage the birds to clean the track out and not to leave the finer feed (ie the minerals), behind.

“I encourage the famer to regularly look at the feed track to see how well they are eating. If it is clean we will lift the feed level by 2mm to give them a little extra. If they are not cleaning the track there is a danger they will get lazy, the food will get finer and less palatable.”

One way for the farmer to see if the birds are eating well is to feel the birds’ crops at the end of the day – full crops are a good sign.

The 16-week birds should be getting 100ml of water a day. In summer, they may also need an electrolyte containing salt and sugar to prevent dehydration. Once they’re laying, hens should be receiving 1.8x the level of what they are eating – 180ml/day.

Mr Gravatt is keen to weigh the birds at as near as possible the same time of day for between four and six weeks to provide accurate and consistent weekly weight gain figures. The company provides a regular weekly record chart from birth during rear, though the birds quite often lose 5-7% of their bodyweight during transport.

After settling in, he expects pullets to gain 60-80g/week and would like to see them reach a 1,500g target by week 18. Evenness is also monitored closely, to determine the numbers of birds that are outside the 10% mean weight tolerance level.

This ensures the farmer gets a uniform flock. Birds in an uneven flock will mature at different times and will show a low flat peak of production.

Ventilation is also important. Mr Gravatt believes farmers should not be afraid of ventilating 24/7 when the birds first arrive. “My adage is that, if you’re not comfortable, then they’re going to be in the same situation.”

Some farmers like to keep the new birds in the slatted area for the first few days, so they are close to the feeders/drinkers, and this is useful, particularly in winter months.

In summer, Mr Gravatt prefers them to have access to the whole shed. He believes birds reared on a multi-tier system still cope well in flat-deck laying systems, as birds that are used to hopping up will have a tendency to lay fewer floor eggs.

Lighting should replicate conditions outside, so Mr Gravatt advocates extending lighting hours from 8am-6pm to 8am-10pm at the height of the summer. This allows the bird to develop more before onset of lay, resulting in better persistency and shell quality in the later stage of lay.

Manor Farm has been run by the Churchouse family since 1941, with John coming back home in 1971.

He moved into egg production in the late 1980s when one of his neighbours, who had three poultry sheds, sold up. At first, Mr Churchouse rented the sheds, but after talking to a feed rep, he felt that the free-range egg sector could offer a niche market.

He originally had 3,000 birds, but over the years this has risen to 18,000. “In the early days I made a lot more money because it really was a niche market and I was getting £1.10/doz for large eggs. Unfortunately, I’m not getting much more now, and feed prices in that time have probably quadrupled.”

Mr Chruchouse sells his eggs to Stonegate Farmers, who in turn supply Waitrose with eggs from his British Blacktail birds.

The pullets that had recently arrived at the time of Poultry World‘s visit, averaged 1,350g at week 16 and had been reared on Humphrey Pullet’s multi-tier system near Petersfield, Hants, where they had experienced similar feeder systems, even though they are now based in a flatbed set up.