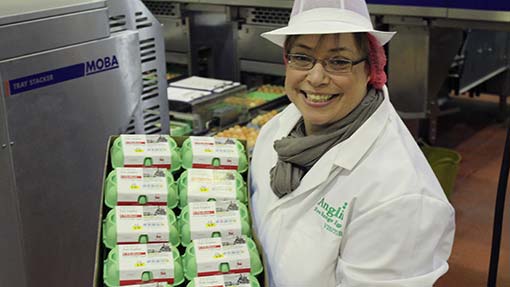 Three year’s since it first started packing eggs, Anglia Free Range Eggs has been on an upward curve, driven by good service and marketing, as Philip Clarke explains

But that goes with the territory as far as Harry Irwin and Clair Bullen of Anglia Free Range Eggs are concerned, and explains why both of them were to be found on a cold Sunday morning in early March, helping out at an omelette cooking demonstration in Wisbech town centre.

“Our marketing strategy is all about building our reputation and getting our name out there,” says Mrs Bullen. “It’s about establishing ourselves through our actions, rather than just words.

“We were amazed at just how interested the public were to learn the basics of cooking a simple veggie omelette. With the help of a chef, we served up over 2,000 samples over the two days. For us, it was time well spent.”

The omelette cooking demo was just one of a number of activities the company has engaged with to get noticed and spread the message about the importance of eggs as a fresh and healthy meal or ingredient.

Another has been the Passion to Inspire Scheme, launched and run by local chef Murray Chapman as a competition and mentoring scheme for trainee chefs in catering colleges throughout East Anglia.

Mrs Bullen has been directly involved, going into the colleges to teach students about the virtues of fresh, quality ingredients – and eggs in particular. “They are mostly 16 and 17-year-olds and, as part of the scheme, we give them an egg challenge. What they come up with is absolutely fantastic.”

The packer has also been involved in the Future Farmer Foundation run by supermarket Tesco, designed to help young people achieve their ambitions within agriculture through leadership training, business advice and supply chain experience.

Two of Anglia Free Range Eggs’ younger contracted suppliers have taken part in the scheme – including 20-year-old Beth Bennett, who manages 16,000 free-range hens and was involved in the pilot project.

The next plan is to open the packing station to school visits.

All this helps raise awareness of Anglia Free Range Eggs. But Mrs Bullen admits that developing the company’s own brand has not been its priority. Accounting for less than 5% of all sales, this is viewed more as a “safety valve” for a time when there may be surpluses.

The real marketing focus, she says, has been on forging strong relations with retailers, organising visits to the company’s farms, trips around the packing station and keeping communication channels open at all times.

In this respect, the company’s relationship with supermarket Tesco has been paramount, and Anglia Free Range Eggs now supplies all the retailers’ East Anglian regional eggs, as well as all its own label supplies in East Anglia via the Peterborough depot.

“We could not have got where we are without Tesco’s assistance,” says Mr Irwin. “They initially offered us fixed volume contracts and this increased every quarter as we grew our supply base, such that we were able to match supply with demand.”

As output has grown, the company has also started supplying regional eggs to The Co-op and Budgens, and found further outlets for its own brand eggs into smaller, more local retailers such as Roy’s of Wroxham.

“It’s all about building bridges,” says Mr Irwin. “We both have experience of dealing with retailers. At the end of the day, they are just ordinary people with a job to do.

“It’s not all about price. The key is to convince them that we are a safe pair of hands, committed to the standards we set and determined to deliver what the customer needs. At Christmas, our busiest period ever, we delivered 100% of what we were contracted to do to every single customer. Had we not done so, we would have lost business, whatever the price.”

Anglia Free Range Eggs is now into its third year as a regional producer packer, and marketing has been a key focus as it has sought to build up critical mass.

From a base of just five producers delivering 400,000 eggs a week in 2011, the business has grown steadily to a point where it now has 25 contracted free-range units sending in some two million eggs a week.

The modern packing station at Attleborough in Norfolk is now operating five days a week, staff numbers have grown from five to 22, and the finished goods area has been trebled in size to cope with the extra throughput.

The company says it is about halfway towards its target of running its packing station at full capacity within three years.

Last year the packer was awarded a Good Egg Award by Compassion in World Farming , in recognition of its contribution to promoting free-range eggs, with an emphasis on local production and reduced food miles for both inputs and outputs.