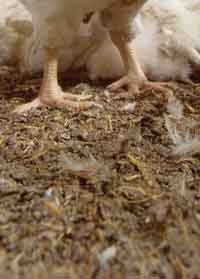 Failure to secure approval for a poultry litter power plant could spell the end for broiler growing in Northern Ireland, putting thousands of jobs in jeopardy.

That was the warning given by Tony O’Neill, chairman of Rose Energy at the recent Northern Ireland Poultry Industry Conference held in Cookstown, Co Tyrone.

Rose Energy is a consortium comprising of Moy Park, O’Kane and Glenfarm Holdings, which is seeking to build a 30MW power plant using 300,000 tonnes of litter a year. The £100m plant would generate sufficient electricity to supply 25,000 homes.

A key driver behind the project is the EU Nitrates Directive which will see a scaling back in the traditional practice of using poultry litter as a fertiliser. Therefore the poultry sector faces an uncertain future unless it comes up with another use for poultry bedding.

The application was originally submitted in June 2008 and Rose Energy has spent the last year working with planning officials and taking part in a public consultation, culminating in additional information being submitted this summer.

“We now expect the application to reach the minister’s desk in mid-November and we then hope it will be early December for a decision.” Said Mr O’Neill

However, the proposal has attracted much local opposition over fears on the site, its impact on the local environment and the abstraction of water from Lough Neagh.

“There is no plan B. We genuinely don’t have another option for litter disposal.”

He called on producers to write to their local member of the Northern Ireland Assembly (MLA) and lobby local councillors. “Use your influence and explain the significance [of a rejection to the poultry industry].”

Explain that the failure of the planning proposal risks the future of the Northern Ireland poultry industry.

“Losing the poultry sector would see almost every town, every council in Northern Ireland suffering job losses and revenue.”

He highlighted the wider impact on farming, transport, packing and even the local harbour as the sector ships feed and chicken.

“We have built up the poultry industry to be a successful, key part of local economy. For example, £30m goes into the Ballymena local economy.”

It’s not just the economic side, there are the environmental benefits. The project will benefit water quality of rivers and lakes, as it would reduce land loading by 30%.

“Today you can virtually walk on Lough Neagh because of all the algae.”

On top of this, the plant will provide one-third of the renewable energy target. “Without the project, Northern Ireland will not meet this target.”

He concluded by highlighting that existing power plants in the UK and The Netherlands produce fewer emissions/tonne than coal, oil or gas.

“Poultry litter is effectively just shavings and grain left over. It is a relatively clean product and the technology is proven,” he said.