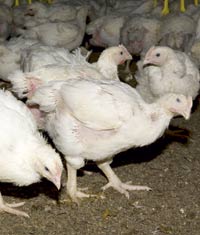 Heat stress is a growing problem on poultry units, with ventilation systems struggling to prevent mortality on the hottest summer days. But there are ways to reduce the risk of heat stress, as Olivia Cooper discovers

High ambient temperatures can have a major impact on poultry performance, leading to reduced growth rates or egg production, and, in extreme cases, death. 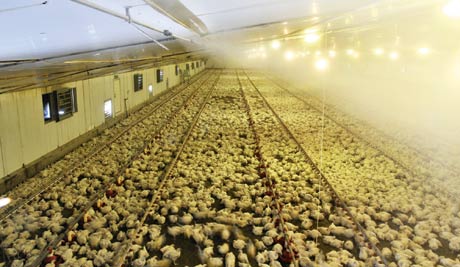 British summers are getting hotter, with peak temperatures recorded as high as 38C. When coupled with high humidity, the combination can be lethal, particularly for broiler flocks nearing the end of their cycle, says Justin Emery, poultry consultant at ADAS.

“The body temperature of the broiler must remain very close to 41C – if it rises more than 4C above this, the bird will die.” Outdoor ambient temperatures greater than 30C have been occurring more regularly in the UK, and if air temperatures in the poultry house reach this level, birds will be at significant risk of heat stress, and should be monitored carefully. “The stock keeper should be aware of bird behaviour and look for signs of distress such as panting.”

Panting is an important way for birds to lower their body temperature, but only works if the humidity is not too high. “Hot, humid conditions are therefore much more stressful than hot dry conditions,” says Mr Emery.

The design of the poultry shed is critical to lowering the risk of heat stress, he adds. “Roof colour, reflectivity, pitch and orientation, and whether the building is in the shade or not, are all factors which will have a bearing on solar heat gain.”

Good insulation is essential to reduce heat transfer into the house. “On a hot day, the surface of a roof can reach 60C. Measurements have shown solar gains of up to 30W/sq m coming through old broiler house roofs, increasing the heat load on the birds below.”

Stocking density is also important, as if the density is too high, hot, humid air is trapped between the birds, says Mr Emery. “Birds grouped together may be up to 40% less efficient at losing heat.”

Providing cool drinking water is another way to relieve heat stress, as it stimulates water intake and helps reduce body temperatures. Walking the birds to release warm air trapped beneath them can also help, but should not be done if the birds are already stressed, he adds. “At times of high ambient temperature or when high humidity poses a threat to the birds, catching, loading and transportation create particular risks of heat stress. It is important that plans are made in advance to reduce the risk.”

One of the most effective ways of lowering house temperature is a decent ventilation system, says Mr Emery.

“The house and ventilation system must compliment each other to achieve maximum benefit. The result might be a house designed for combined conventional/tunnel ventilation, or being narrower for improved efficiency of air flow, or incorporating some form of air conditioning.”

High air speed is essential for heat stress relief, and meat producers should aim for between 1m/s and 3m/s. Internal recirculation fans can play an important role where air speeds over birds are poor, but do not help to reduce humidity or air temperature, he adds.

Mechanical ventilation cannot cool the house below the outside ambient temperature, so on very hot days an additional cooling system may be required in some sheds. One option for both new and existing sheds is to install a high pressure misting system, which sprays microscopic drops of water from a series of non-drip nozzles. The heat generated by the birds, in combination with the mechanical extraction system, means that the mist is evaporated, cooling the air temperature and ensuring it is not over-saturated.

“High pressure evaporative cooling differs from low pressure misting or fogging systems that wet animals in order to cool them – a process which is especially unsuitable for poultry,” says Jeremy Sanderson, technical sales engineer at agricultural ventilation manufacturer, Hydor. “On hot days, the system is capable of lowering temperatures by up to 10C, potentially reducing mortality rates by 25%.”

The Hydor system emits a fine mist in short bursts, and is turned on and off automatically when linked to a timer or thermostat. Being modular, it can be easily adapted to any building, attaching to either the shed walls or ceiling. Installation in a typical 40,000-bird house takes about a day, and will cost between £5000 and £8000.

The cooling can also be used in short, 20-second bursts in the winter months to replace humidity taken out by heaters, without reducing the temperature, says Mr Sanderson. This is of particular benefit to chicks in the first two weeks of the cycle, when the houses are heated to high temperatures.

“The improved climate promotes food intake, and higher growth rates are therefore achievable.” The water droplets also remove small particles from the air, making the system useful for controlling levels of dust, pollutants, and odour. When used without the ventilation system, and run continuously, it can also be used for cleaning and disinfection purposes.

“The Hydor evaporative cooling system is highly economical, with low levels of water and energy consumption,” says Mr Sanderson. “Energy usage by electric fans is reduced because the fans can be run for shorter periods and less frequently because of the lower temperatures created.” 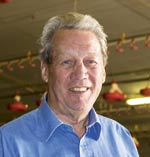 Finn Christensen installed Hydor’s cooling system in two 50,000-bird broiler sheds at Steanbow Farm, Shepton Mallet, Somerset, last year. “We’re quite impressed – it was dead simple to fit and will drop the inside temperature by about 7C.”

The two houses were already fitted with a pre-vent ventilation system, but in hot weather required further cooling to reduce the risk of mortality. “We lost 4500 birds in one day three years ago,” says Mr Christensen.

Instead of roof extractor units, the sheds had 10 impeller fans along the walls, with a low-level louvre shutter between each fan. To fit the evaporative cooling system, four nozzles were installed on the ceiling above each fan, one metre apart.

The fans drive both air and mist along the roof of the building, where it meets the heat generated by the birds. The mist evaporates, thereby reducing the temperature of the air, which falls to the level of the birds on the floor. The air pressure within the building forces the cooling air across the floor and out of the low-level louvres.

“The reduction in excessive temperature was impressive from the outset,” says Mr Christensen. “Within five minutes, the temperature had dropped from 30C to 25C. You certainly wouldn’t get a heat death – we have vastly improved conditions for the birds in hot weather and are reducing our energy overheads at the same time.”

He is now fitting the system in another two sheds, and is even considering using it in his dairy housing to help cool the cows in extremely hot weather.