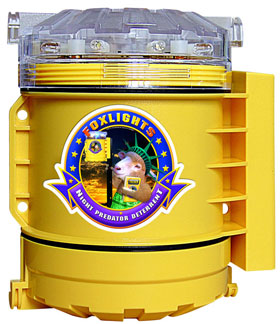 A fully automated fox deterrent invented by an Australian sheep farmer is now available in the UK.

Foxlights use an array of small LED bulbs programmed to flash intermittently in random sequence over a 360-degree area and, with several positioned along a perimeter, are designed to mimic a person patrolling with a torch.

The device is fully automatic thanks to a light sensor and computer chip and is powered by a six-volt battery, which the manufacturer estimates will provide three to six months of fully-effective use dependent on seasonal conditions.

The units are priced at £65, including postage and packaging, for the UK market, and Derek Lewis, UK agent for Foxlights, recommends setting units 100 to 150 metres apart near roosting pens for free-rage poultry or four to six units to cover a flock of 100 to 200 sheep.

Invented by Ian Whalan, a sheep farmer from New South Wales, after he was forced to patrol his farm at night to protect his flock against night predators, the devices have been sold in Australia for two years and are being used in Canada, Switzerland and South Africa.