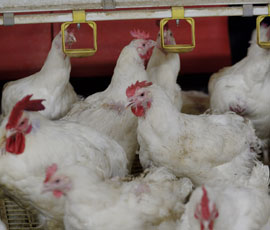 Animal health company Elanco has launched a new product which, it claims, could prove just the tonic for the poultry industry in the face of rising fuel and feed costs.

Following last year’s acquisition of Janssen Animal Health, Elanco has improved the former company’s existing poultry tonic. It has added new ingredients to their Elanco Poultry Tonic HD Plus, in the form of a vitamin D3 metabolite and a natural antioxidant blend.

The new blend aims to support birds during the most demanding periods of productivity, such as growth and peak laying and can be supplemented into the diet via the drinking water.

The vitamin D3 metabolite has been shown to increase egg weights by approximately 2%, as well as improve feed conversion rates and feed intake, says Elanco.

It is more available to the body than vitamin D3, which plays a role in calcium metabolism and therefore egg production. And the benefits are not just confirmed to commercial egg producers, but also to hatcheries, as egg size correlates with chick weight.

The supplement still contains nucleotides, which help boost defences against infection, as well as sulphur containing amino acids, methionine and lysine, which are known to increase egg weights and feed conversion efficiency.

Elanco’s new Poultry Tonic HD Plus is suitable for layers, broilers, breeders and turkeys and is available from vets and animal health retailers.