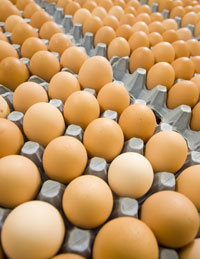 New salmonella rules for layers came into force at the beginning of this month, which means any flock testing positive under the National Control Plan for Salmonella enteritidis or S typhimurium will result in the heat treatment of eggs or birds being sent for slaughter.

Noble Foods’ chief executive Peter Thornton said: “We expect the incidence of positive flocks to be very low. However, we are aware of the uncertainty and implications surrounding these new regulations for producers, especially in the absence of government compensation for a business suffering as the result of such an outbreak.

“This new scheme is one of the ways that we are demonstrating our commitment to supporting our egg producers.”

Noble Foods’ cover will be available to all its producers subject to them being “salmonella free” and successfully completing a veterinary audit.

Contract producer and Noble poultry director Martin Troop added: “During the first quarter of this year, veterinary practices across the country will conduct audits, the costs of these will be borne by Noble Foods. Egg producers will need to pass the audit, and to also be part of the Lion Egg Scheme, to remain within the insurance scheme.”

Another egg packer (Stonegate), egg co-op Eggsell and Powell Insurance revealed their own schemes in late 2008.