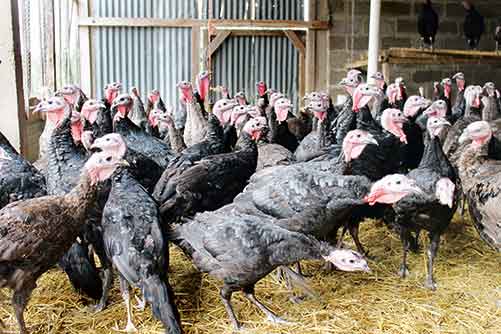 The family has been rearing turkeys on the mixed farm for just over 130 years. But it was in the 1950s that Jamess grandfather, Frank Peele, together with the Morely Agricultural Research Station, decided the Norfolk Black was in danger of disappearing and set about securing the breeding line.

Together with the research station poultry adviser, they collected as many non-related Norfolk Blacks as they could to add to a nucleus flock and started a breeding programme which we still adhere to today, says Mr Graham.

There are 12 different family lines of Norfolk Blacks at Rookery Farm eight of which are pure blacks and four of which include a small amount of Norfolk Bronze genetics, to provide customers with a potentially heavier bird.

Each season, 40 chicks from each family are selected and wing banded, held back as potential new breeding stock. We do not sex these birds, so in theory we should have 20 stags and 20 hens in each group. It never works out like that though. Last year, for example, we averaged about 25 stags to 15 hens I reckon that was natures way of dealing with the bad weather we had. We follow that pattern in our breeding groups. Thats the key to it.

When it comes to choosing the chicks to be retained, Mr Graham says he is looking for stronger, livelier birds that have clear breeding potential. Over the ensuing months, the less good ones will be wheedled out, to achieve a ratio of two stags per 14 hens in each group.

The true Norfolk Black is quite long in the breast plate, the stags having a high dimpled breast bone, with the meat running down into the wing area. Its more like a large pheasant in conformation.

Dark plumage is obviously important, though they dont have to be jet black, as the feathers naturally have a slight tinge at the tips. Over the years the fancy fowl people have got it into their heads that they should be jet black, but thats not how they really are, says Mr Graham.

Above all, the stags need to have long black legs, so they can easily mount the hens for natural mating, while the hens need to be strong enough to take the weight of the stag.

I was lucky, as a lot of the knowledge was passed on to me by my grandfather, and by our old stockman, John Thacker, who started on the farm when he was 13 and worked here until he retired seven years ago.

Those birds that make the grade start mating in the first half of March and carry on to the middle of June in a normal year though this year was later due to the cold winter. The hens are fitted with canvas saddles to protect their skin from tearing when the stags stand on their backs during this period.

We generally keep the breeding stock for two seasons, and there is no need to fit saddles on the older birds as their skins are tougher and the stags know what to do by then, says Mr Graham. The older birds also tend to give us bigger chicks and come into lay later, which gives us a wider range of birds to sell commercially.

The hens tend to lay four or five eggs a week, which results in about 70 eggs per hen. Fertility changes by the season, but averages about 68%. We have been as high as 85%, but then we get weaker chicks and higher mortality, so it all tends to balance itself out.

Eggs are collected daily from the straw nests in each breeding pen, stored and then put into the setters every Monday, to give a weekly production run. Incubation takes 28 days though we do get some pipping from 25 days with the stronger chicks

With chick mortality at 3-4%, a typical breeding hen may produce 45-50 live chicks a year, some of which will be retained for breeding, though most will go into the commercial flock.

The Meade brooders on the farm are at least 70 years old and still doing a good job. The birds are kept in groups of 80 and the temperature set at about 23C. This group size means the poults can huddle together if they get cold, but will not smother each other, says Mr Graham.

The brooding floor is made of mesh, as this helps keep their feet dry and is good from a disease point of view. Its simpler than putting wood chip down and avoids the problem of the birds eating the shavings rather than the crumb, which can lead to crop impaction and uneven growth.

After four weeks the birds are moved in the same groups into small huts with outside sun parlours and, three weeks later, they go into the rearing yards, prior to being given access to the great outdoors.

Peeles Norfolk Black poults start off on a crumb from Norwich-based Duffields or Chelmsford-based Marriages, moving on to a wheat (50%), concentrated meal (25%), barley, oats and field beans mix from five or six weeks old.

They stay on that until late October and then I assess size and weight, before making any changes, says Mr Graham. I might introduce some whole oats, as the high oil and fibre content is good for their plumage. We like to see nice long feathers and well set skins, as this helps us when it comes to hand plucking.

Mr Graham says he is not too concerned with feed conversion rates, as the birds only eat what they need and grow happily at their own pace.

The ration contains about 17% protein compared with 30% for more commercial breeds, so they are quite cheap to feed. They are also efficient, costing about 10% less to get to slaughter weight than Bronze turkeys.

As for disease, Mr Graham says blackhead (histomoniasis) is the one to look out for, with birds especially vulnerable in times of rapid temperature fluctuation.

With no licensed treatments available, maintaining strict biosecurity is crucial, he says. Thats why I keep my birds in smaller groups. We also rotate the range, and keep them off poached ground. And it goes without saying that there are no other poultry species on the farm.

Overall mortality is low, at about 3-4%. If there are problems, they tend to be in the first couple of weeks.

Mr Graham also reports some losses from birds flying away. Its not a major problem, but we dont clip their wings and they do like to get up off the ground at night. Once they are out on the range, one or two do fly away.

Slaughtering the turkeys for Christmas starts in the first few days of December.

The birds are walked up in groups into a small, dark holding pen, and then killed by neck dislocation before being shackled and plucked, still warm.

We do not bleed the birds, partly because we need to keep the feathers clean and dry.

The birds are hung in a cool store for one-to-three weeks to optimise the flavour, and then eviscerated and the sinews removed just prior to dispatch or collection.

Marketing involves the usual mix of leaflets, small ads and word of mouth, with a lot of customers coming back year after year. We try a little bit of everything.

The business has also benefited from a lot of free publicity over the years, with appearances on Rick Steins Food Heroes TV series, the Hairy Bikers cookery programme and even Michael Portillos Great British Railway Journeys.

Sales are split roughly a third farm gate, a third mail order and a third local butchers though there is no doubt the internet is the growth area, says Mr Graham.

Pricing is always a balancing act between what the consumer can pay and what the bird has cost. We froze prices in 2010 and 2011 in response to the recession, but last year we had to go up 10% due to the high feed cost.

This year we will be putting in another small increase, in part to cover the cost of introducing credit card facilities on our website.

Mr Graham says he does his utmost to avoid the wholesale trade, being careful not to overproduce, and freezing any leftover birds to offer to the Easter market.