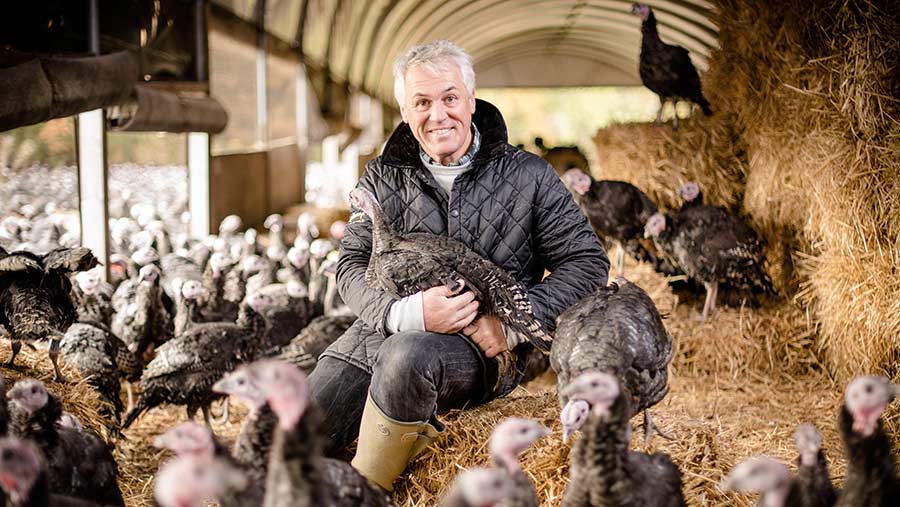 Every three years, Kelly Turkeys throws open the doors to its Essex headquarters and welcomes some of the 800-900 small farmers who rear its breeds for Christmas.

This year, there was marketing advice on offer from the firm as well as an overview of the seasonal market.

In addition, there were demonstrations of new kit, including a gas stunning device that is within the price range of smaller farm producers.

Seasonal turkey producers should consider selling butterflied cuts of turkey to combat the rise in lower-cost imports at Christmas.

For years, imported breast joints have been the bane of farmers who run a few turkeys for Christmas, particularly those who sell birds to their local butcher.

See also: So you want to… tap into the Christmas turkey market

“I have no doubt that 50% of most butchers’ seasonal turkey sales are butterflied cuts,” says Paul Kelly, managing director at Kelly Turkeys. “If the market hadn’t changed, we might be selling twice as many turkeys at Christmas.”

The irony is that while supermarkets often make much of their “buy British” credentials, local butchers, which can be fourth- or fifth-generation businesses, will offer some foreign produce over their counters, adds the firm’s Phillip Regan.

In truth, the seasonal market has changed, says Mr Regan. People are having smaller gatherings at Christmas, have less time and do not want to waste food – making butterflied cuts of turkey a popular choice.

“And you can see why butterflied portions are so popular with butchers,” he adds. “They buy it for £5.50/kg and sell it for £13/kg.

For many years UK farmers rearing birds for Christmas have staunchly stuck to selling whole birds, but they should consider responding to the market and offering more varied cuts, Mr Regan says.

He suggests that farmers should consider selling butterflied joints at £8-£9/kg and making a British alternative available.

“You do need to offer these cuts if you want to carry on in the business. There is a market there and you can make money. At the moment butchers can’t get many UK-produced butterflies.”

“We at Kellys talk about the beauty of the whole bird and will continue to do that. But we are listening to what the customer is wanting from the butcher.”

In responding to that demand, the relationship between butchers and local farmers could be upheld, he suggests.

2. Sell at a fixed price point

Making the switch from selling turkeys at a price per kilo to fixed prices based on weight bands was a “no-brainer”, according to Paul Kelly.

While retailers still have to put the exact weight of a bird on the packaging, fixing prices into set weight bandings gives shoppers, and even butchers, far more clarity on the cost of their Christmas turkey.

“Selling turkeys at a unit price is the best thing we have ever done,” he says. “I genuinely think it’s the best way to market birds and I don’t know why we didn’t do it a long time ago.”

Even butchers now buy birds at a fixed price and, after adding their margin, do the same when they sell.

It means that if a customer calls to enquire about a bird they are given a price straight away, rather than an estimate after some consultation based on the number of people that will be present, explains Mr Kelly.

3. Be vigilant for farm break-ins

Farmers need to be wary of animal rights activists installing covert cameras on their farms and potentially releasing footage that could be unfairly damaging to a farm’s reputation.

“It doesn’t take long on a working farm for something to be caught on camera that doesn’t look good,” Mr Kelly says.

His business was targeted last year by activists, who incorrectly claimed that the video footage they released was from a Kelly Turkeys farm.

Pens for turkeys with poor feather cover or other health concerns present a particular challenge, he adds, as it is easy for someone to focus only on ill birds separated from the main flock for their own welfare.

Mr Kelly recommends vigilance: look out for potential spots where a camera may be recording, but also consider what is happening on the farm.

“Just think: ‘Would I be happy to show my customers this?’ If not, then think long and hard about it,” he suggests.

A new stunning device was showcased at the open day, which promises to put the welfare advantages of gas within the grasp of smaller producers.

Large poultrymeat processors now generally use gas stunning, rather than electric waterbaths, to deliver an unrecoverable stun to birds before they are slaughtered.

Furthermore, most retailers will only accept birds that have been stunned in this way. 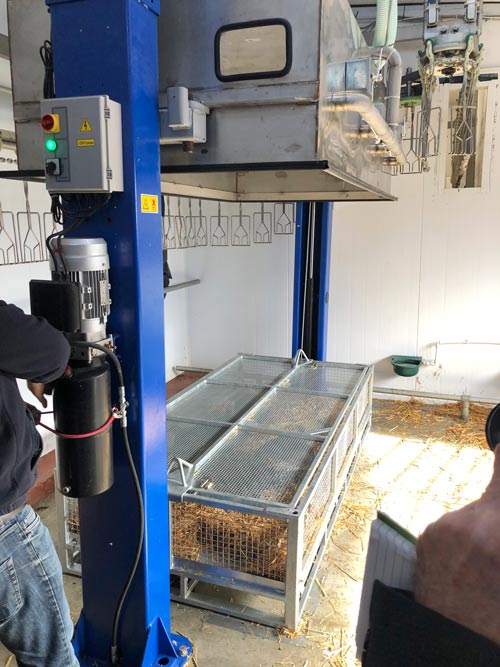 But installations, which are typically designed to deal with thousands of birds at a time, cost hundreds of thousands to install.

The new, smaller, stunning unit has been developed with consultant Ed Hurford and Kelly Turkeys.

It lowers a module over crates containing birds, which then fill with carbon dioxide. An unrecoverable stun is delivered in a matter of minutes.

“The Gallus Gas System is aimed at meeting the challenges of smaller poultry producers and moves one step closer in giving them access to the retailers looking for family owned brands but requiring gas as a method of stunning,” Mr Hurford says.

In the 1970s, about 20 businesses supplied different breeds of turkey. Today there are just three: Aviagen, Hendrix Genetics and Kelly Turkeys.

The first two are multinational corporations selecting birds for the fastest growth rates, while Kelly Turkeys is a smaller outfit focused more on conformation and meat quality.

Some 26% of fresh turkeys sold at Christmas in the UK come from its hatchery.

The business markets its chicks, but also sells birds in its own right, and has a joint venture with a German business producing organic chickens and turkeys as well as a small US operation producing birds for Thanksgiving.