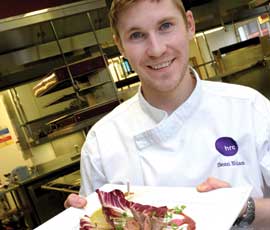 Two student chefs will replicate winning recipes at The Savoy in September, and serve them up to more than 280 guests at the British Turkey Awards.

This year Sean Nolan, from Hertford College, and Daniel Draper, of Westminster Kingsway college, were judged to have invented the best turkey-based dishes in an annual competition to boost the profile of cooking with turkey. They both won £400 in catering vouchers and the opportunity to cook at the Savoy for the awards dinner.

The British Turkey Federation has run the competition for the last three years, and student chefs can enter for the chance to cater at its 2014 dinner and awards now.

It will also run two-hour workshops between October 2013 and September 2014 at catering colleges, which will feature a talk from a turkey farmer and a cookery demo from a chef.

Students can enter by devising a starter and main course based on either turkey breast or thigh.

“This is a fantastic opportunity for student chefs to develop a menu that could be served to the industry movers and shakers at the annual awards dinner in September 2014,” said Paul Kelly, chairman of the British Turkey Federation. “We are extremely excited to be continuing our student chef activity and look forward to seeing some delicious dishes being entered.”

For more information about this year’s competition, or to organise a visit to a catering college, email: info@britishturkey.co.uk