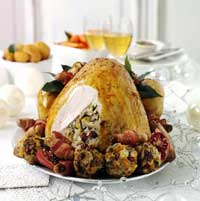 Promoting the health benefits of eating turkey could be one way of reversing the decline in turkey consumption.

Looking at the reasons why consumption has fallen, Mr Pullen suggested that the big challenge is many consumers don’t buy turkey outside Christmas.

“They see it as a Christmas-only meat, difficult to cook and they are not confident of the outcome. Also, it is poorly merchandised with little choice of meat cuts in stores.”

So how can the UK industry boost consumption? Mr Pullen highlighted the US industry as a good example. “They have managed to double consumption in the last 15 years and it is now seen as the white meat of choice.”

Data shows that 30% of US households eat turkey each week and 90% eat chicken, showing that you can have a healthy consumption of both meats. Households with chicken have seen the biggest rise in the US.

While whole birds account for the largest proportion of the market, turkey mince now accounts for 10% of the market.

Looking at the reasons, health appears to be the biggest driver with increasing concerns over obesity.

It could also be an opportunity in the UK. Mr Pullen highlighted that the average saturated fat intake is 20% above the recommended intake.

He calculated that this excess can largely be solved by families switching from beef to turkey mince in one dish. For example, using turkey mince to make spaghetti bolognaise can cut saturated fat intake by about 5g, containing a quarter of the saturated fat compared when using beef mince.

However, he warned that care is needed as preaching too much on health can also turn off consumers.