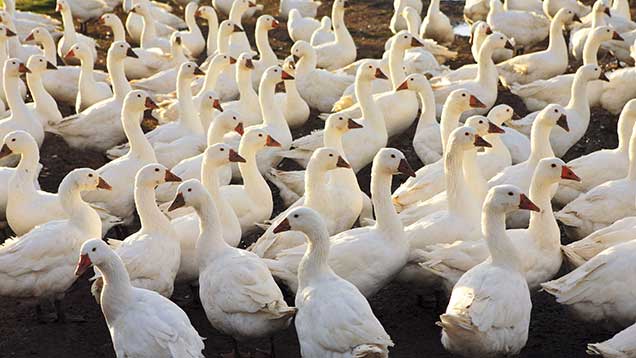 A key fixture in the calendar for goose producers large and small has been announced – its trade body’s annual farm walk.

The British Goose Producers will this year be hosted on 15 October by Steve Childerhouse, of Great Grove Poultry near Attleborough, Norfolk.

It is a region synonymous with goose farming, and could be considered the “traditional home of geese in the UK”.

The Childerhouse family set up their farming business there in the 1940s after their existing holding was requisitioned by the army during the Second World War.

Goose production began about 20 years ago, according to Steve.

“We placed a sign for ‘plucked geese’ at the top of the farm drive and the birds sold quickly.

“The following year we raised eight geese and 20 turkeys and the business expanded to where it is today — we now sell about 800 geese and 9,000 turkeys at Christmas.”

The British Goose Producers walk represents an excellent way for anyone wanting to keep a few geese for Christmas – or thinking of rearing thousands – to network with other farmers and learn more.

Alongside the farm walk will be a discussion on topical issues for goose farmers.