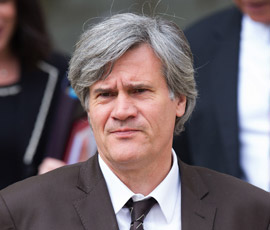 The announcement was made at a meeting with industry representatives in Rennes on Tuesday (13 August), following a week of protests in which local egg producers dumped hundreds of thousands of eggs outside municipal offices.

The demonstrators, who were not affiliated to any particular union, blamed new EU welfare legislation, price pressure from supermarkets and high feed costs for their predicament.

In a statement, the French government acknowledged that the market was out of balance, with production having increased by 25% over the past 10 months.

• Restore market equilibrium by encouraging the development of more export demand, as well as non-food uses for eggs. He has pledged to involve state agencies in this effort and to co-ordinate the donation of up to 250,000 eggs a week to charities.

• Help producers in immediate difficulty by offering tax breaks, urging a more benevolent approach from the banks and encouraging them to apply for cash aid from the Mutualite Sociale Agriculture (MSA).

• Provide better market information and set up a meeting with supermarkets by the end of August to discuss contracts.

“The minister believes in this sector, in which the state has invested €11m during the upgrading of facilities, and would therefore like to offer it a future,” said the statement.

While not involved in the demonstrations, Yves-Marie Beaudet, president of the egg section of the Union of Breton Meat Producers (UGPVB) welcomed the minister’s pledge to boost export demand and said his members would support efforts to contain production.

He explained that it was costing French egg producers €7 to produce 100 eggs, for which they were being paid just €5.

As well as the new welfare legislation and pressure from supermarkets, French egg producers also blame the EU Commission for having removed all export subsidies in 2012.

But the commission denies this link, and has ruled out intervening in the current situation. “We are in a market adjustment process, not in a crisis,” said a spokesman.

Brittany accounts for about 45% of all French egg production and local producers said they would allow 15 days for the minister’s measures to take effect, before returning to direct action.

Got a view on this topic? Why not comment below, or share your thoughts on our forum thread