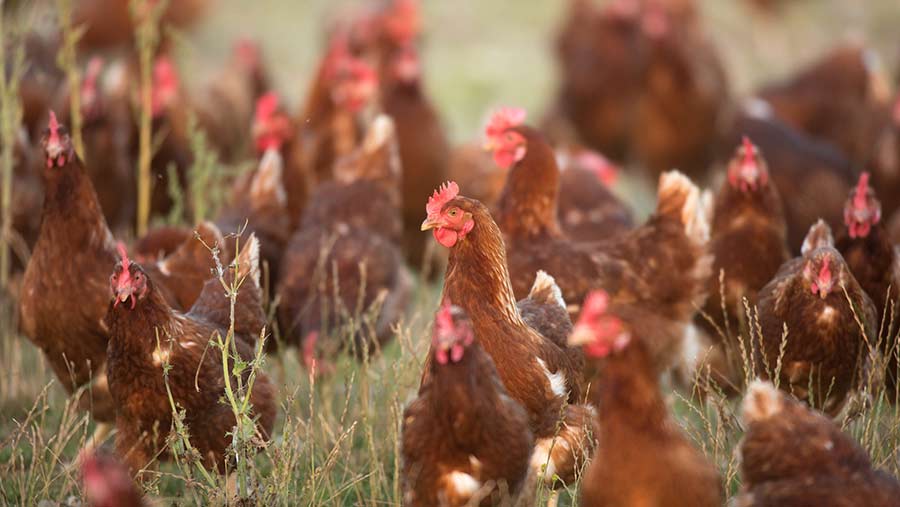 All poultry and birdkeepers in Northern Ireland (NI) will soon be required to follow strict biosecurity measures following an increase in outbreaks of avian influenza in Great Britain.

NI agriculture minister Edwin Poots has announced that an Influenza Protection Zone (AIPZ) will be introduced by the Department of Agriculture, Environment and Rural Affairs (Daera) across the province from midnight on 17 November.

The move to introduce the AIPZ in Northern Ireland follows confirmation of several new cases of the H5N1 highly pathogenic strain in poultry and captive birds.

Poultry and birdkeepers in NI will need to follow strict biosecurity measures to help protect their flocks. Further information is available on the Daera website.

On Saturday (13 November), Defra said the H5N1 strain of the virus was confirmed in birds at a commercial poultry unit near Leeming Bar, Hambleton, North Yorkshire.

On Friday (12 November), the disease was confirmed in birds at a poultry farm in Salwick, near Preston, Lancashire.

On Thursday (11 November),  the H5N1 strain was confirmed at an animal sanctuary near Frinton-on-Sea, Tendring, Essex, All birds on the infected premises have been humanely culled.

In total, cases have been confirmed in captive birds or poultry at five locations in England.

Two further cases were confirmed earlier this month at a poultry farm in Angus Scotland, and at another in Chirk, near Wrexham, North Wales.

Temporary control zones covering 3km (1.8 miles) and 10km (6.2 miles) are in place around all the affected areas.

No cases have been detected in NI yet, but the recent positive findings of H5N1 in wild birds in the Republic of Ireland suggests the disease may already be present in NI, Mr Poots said.

Therefore, the minister said he had taken the decision to introduce the AIPZ “based on sound expert advice in consultation with the industry”.

“If avian influenza were to enter our Northern Ireland flock, it would have a significant and devastating impact on our poultry industry, international trade and the wider economy,” he added.

Defra introduced an AIPZ across Great Britain on 3 November, following the discovery of a strain of the virus in a small poultry unit in Warwickshire.

Infected wild birds migrating to the UK from mainland Europe are believed to be responsible for spreading the disease here among captive birds and poultry flocks.

Avian flu is primarily a disease of birds, and the risk to the public’s health is “very low”.

However, it is a notifiable disease and anyone who suspects it in their flocks must alert the relevant authorities. Failure to do so is an offence.

If you suspect any type of avian influenza in poultry or captive birds you must report it immediately by calling the Defra Rural Services Helpline on 03000 200 301.

If you find dead wild waterfowl (swans, geese or ducks) or other dead wild birds, such as gulls or birds of prey, you should report them to the Defra helpline (03459 33 55 77). Do not touch or pick up any dead or visibly sick birds that you find.

In Northern Ireland, contact your Daera Direct regional office or the Daera Helpline on 0300 200 7840.