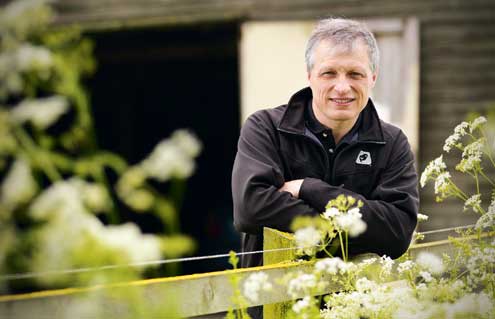 Egg producer Duncan Priestner is the new chairman of NFU’s poultry board. Rhian Price caught up with him at his Cheshire farm as he gave his first interview since starting his new role

Over the years what has been your biggest lesson?

You’re learning all the time. But one of things I have learnt is that when the egg laying bird numbers in the country go over 30m the price of eggs invariably drops. When I get Poultry World one of the first things I look at is the chick placing numbers, because as the chick placings go higher there’s a surplus of eggs and the price drops.

What do you think are the greatest challenges facing the poultry industry today?

The volatility in all the different markets is one of the biggest problems at the moment. You’ve got volatile feed prices, egg prices and egg numbers. The future challenge will be controlling all those things, because even the smallest fluctuation in prices can make a massive difference to your profit.

Another big hurdle is people opposing planning. The broiler and turkey industries are expanding markets and producers need more sheds if we are to keep the industry viable. Planning is going to be a critical part of building this new, modern industry that we need.

How do you think producers can overcome these challenges?

My gut feeling tells me that now is the time to open up farms. It is not just about where your food comes from; it’s about reassuring people that animals have decent lives. Factory farming is going to have a big role to play in years to come if we are to feed the growing population and it is vital the public perception is changed and they realise large-scale farming doesn’t compromise animal welfare.

Do you think public perception is a big issue affecting the poultry industry?

Public perception has changed in recent years. Suddenly people have had a reality check. They are hard up, incomes are dropping and with the egg industry now having its higher welfare colony systems – the message is getting through bit by bit and people seem to be much more accepting.

People are realising that the industry is not only environmentally friendly, but we are welfare friendly too, and people like the taste of broiler meat. It’s also very affordable. It’s ticking every single box. But there’s still work to be done and I think there’s no better time to do it.

Why do you think it was time for someone new to step into Charles Bourns’ shoes?

Charles has done a tremendous job and will still be involved with the board. But if we are not careful we will all stay in the same position for years and suddenly it will be hard trying to get new and younger people involved.

I want to encourage new people onto the board, so that people are fighting for a position – not where someone is forcing someone’s hand behind their back.

How will you encourage people to come forward and get involved?

One way is by getting younger people to meetings and building confidence and experience. Rather than getting the same people to do everything on the board. I want to get everyone doing at least one thing, such as going to regional meetings. The idea is that hopefully those people will report back to the board and producers’ voices will be heard.

Describe yourself in three words:

What do you enjoy doing in your spare time?

I have a couple of motor bikes and I like to meet up with friends on a Thursday and if the weather is nice we go for a ride. I also love going out for walks in the countryside.

What would surprise people about you?

That I never liked politics and just wanted to farm.

What is your most important possession?

Probably my house. We don’t go away much at weekends, so we do spend a lot of time here.

If you weren’t a poultry farmer what would you be?

What advantages does that offer?

NFU president Peter Kendall would say that if you want something doing, ask a busy person. Having busy people that are at the sharp end of the market and know what’s happening is what we need.

The old-fashioned thing within the NFU was that the son came home to farm and the semi-retired father went off and did the NFU work. That worked then. But the way businesses work these days we need the people making the descions at the forefront of legislation, because they’ll fight a lot harder.

Do you think beak trimming has a future in the poultry industry?

I hope so. Jim Paice has promised he’ll look at getting rid of beak trimming, but it’s an essential management tool that we need to keep at this moment in time and getting rid of it in 2015/16 is too early. It’s not a political decision, it is an animal welfare decision and we can’t go down that road until we are absolutely certain that there will be no repercussions for animal welfare.

How can producers secure a better price for their eggs?

I think we need to have a contract that is linked back to feed prices. If the supermarkets give a guaranteed price, then it will give packers more of an incentive to manage that market and it will make them think twice before they take on more contracts.

What do you think needs to be done to police the influx of eggs from continental Europe?

I think we need to start pushing harder on this. The gentlemen’s agreement was that, if countries hadn’t met the legislation, then their eggs wouldn’t be exported.

Egg inspectors are policing these things. But all they are doing is checking the numbers on the eggs. If someone is going to break the law it is not difficult to print a different number on an egg. In a country that we have no jurisdiction over, we don’t know what’s being done.

I don’t think countries should export eggs until they’ve got rid of all their battery cages. You’re either legitimate or you’re not, because they’ve got an unfair advantage over the countries that are compliant.

Is there enough competition within the broiler market?

Sainsbury’s has just dropped Vion as a major supplier, so you could argue that there is choice out there and there is a very strong wholesale market. Yes, companies are getting bigger, but that is the way of the world.

Do you think there’s room for a cooperative among broiler producers?

The broiler industry seems to be more vertically integrated than the egg industry. But with the broiler market expanding, I think a lot of broiler processors will probably be buying chicken in through contract reared farms, so I think the opportunity is there. I think that will be a good thing. Maybe people will opt to produce broilers – which is growing market – instead of turning to free-range egg production.