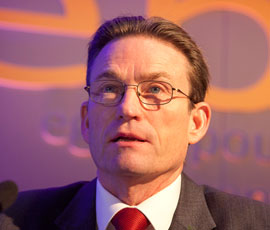 British egg and poultry producers are well-placed to benefit from the expanding global market for their produce, despite the rising cost of feed, competition from overseas and the threat of exotic disease.

British Poultry Council president John Reed told this week’s Egg and Poultry Industry Conference that the cost of feed was unlikely to drop to the levels of the past, while volatility would remain. “Our challenge is to handle volatility better, and this will mean using more sophisticated risk-management tools, and will require the co-operation of the entire supply chain.”

Today’s industry was also in “quite a different world,” he said, because of competition from biofuel production. “It takes a third of the American harvest, and is projected to use around 3m tonnes of UK wheat – that’s almost the same amount as the poultry industry consumes.”

Mr Reed said that, with demand increasing for food and in particular animal protein, “it’s unsustainable to build a biofuel industry, based on feed crops”. He was therefore pleased to see pressure being placed on governments in the EU and USA to review their policies.

“Our challenge is to handle volatility better” – John Reed

And while countries like Brazil, China and Thailand were continuing to increase their production, they also faced rising costs for things like feed and labour. Their own consumers were also calling for better welfare and higher environmental standards.

“We should not rule out the prospect of new export markets for added-value products to these countries as tastes change with increasing incomes.”

But there was no room for complacency. If UK and EU producers dropped their own standards, then imports would flood in.

Diseases from abroad were another global threat, said Mr Reed: Resources in DEFRA and the AHVLA to deal with outbreaks had been drastically cut. Industry’s own resources would have to be used in partnership with government, rather than relying on public resources.

Mr Reed announced that the UK Poultry Health and Welfare Group had been reformed, representing a range of organisations, to provide a “coherent and united” approach in identifying the industry’s biggest health and welfare issues.

Mr Reed’s message was that the most effective way to combat the issues with health and welfare was working together, and he used the BPC’s anti-microbial programme, and the self-regulation of the Red Tractor scheme as examples of this in practice.

“I see the Red Tractor scheme as the best vehicle for getting necessary procedures widely implemented and certainly more preferable to regulation.”