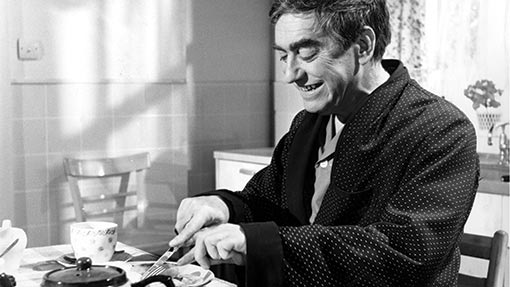 Comprehensive business coverage has been one of the hallmarks of Poultry World  since its inception. Jake Davies looks back at how we covered four major events affecting the industry.

Rise and fall of the Egg Marketing Board

The challenges of operating in a free market have featured in Poultry World across its history. But, between 1956 and 1971, egg farmers were somewhat sheltered by the existence of the British Egg Marketing Board.

Lauded by some, lambasted by others, the board set a weekly price, based on how many eggs they could sell. Packers were the licensees and graded eggs to a national standard, before stamping them with the Lion mark.

The board then marketed them to a variety of outlets, and had a budget for promoting eggs to consumers. Perhaps the most famous of these campaigns was the one fronted by comedian Tony Hancock with his famous “Go to work on an egg” slogan (pictured above).

But less than 10 years after the board was launched, cracks were appearing. Farmgate sales continued apace outside the control of the board. Stories were circulated that stampless eggs were fresher than those carrying the Lion mark. And there was a general view in the 1960s that more industries should operate in a free market.

Some estimates put the size of the egg market under the board’s control as low as 45% in 1968. By then, the Lion mark was in real trouble. “Has the lion roared its last?” asked Pam Lynch in a Poultry World article, while George Roberts said the Lion was “tacitly recognised as a creator of sales resistance”.

An article from 8 April 1971 described the “last supper” of the Egg Marketing Board, and how participants each enjoyed an egg stamped with the Lion for what they thought would be the last time (for many, it would have been). Rupert Chalmers-Watson reportedly gave the toast, and said: “We failed because we were too successful.”

One joked that the eggs served must have been at least two years old, as the last Lion stamp was issued in 1969. But the editor attested to their freshness, describing “an upstanding albumen” as evidence.

“The wholly fatuous regulations applying to stamping and restricting unstamped egg sales, and the contemptible farce of the egg tribunals, has alienated many producers,” he added.

The government of the day then launched the Rowland Wright Reorganisation Commission for Eggs, to determine the future of the Egg Marketing Board.

Its report was published on 20 June 1970, though Poultry World’s lobby correspondent had sniffed out the seven recommendations almost a month earlier.

“The Lion mark is dead,” claimed the opening column of the editor’s diary, suggesting the board had seen its day and that outcome was “satisfactory to most”.

There was some concern that packing stations would now wield too much power over farmers, with the editor suggesting they now “hold the aces”.

“Packing stations, let’s face it, emerge as the marketing force. No longer the licensees of the board, they can do what the board could not do – strike a hard bargain. The disciplines of freedom may prove harder task-masters than toadying to a British egg marketing scheme.”

A year later the board was officially wound down. Uncertainty in the months preceding the move, along with Newcastle disease restricting pullet movements, meant chick placings were down some 25% on the previous year.

A number of novel marketeers emerged, including one scheme by Rank Hovis MacDougall to sell eggs laid in the Highlands to shops in London. But there wasn’t great enthusiasm for branding – eggs were described as an “inelastic commodity”, and it was felt that prices could not be shifted significantly by individual marketing efforts.

There were early power plays from newly released packers, too. Thames Valley Eggs cut an interim bonus for 1,000 producers, citing the need to build a cash reserve when operating in a free market. “It would be unwise for any packing station to distribute profits immediately when they came in,” said John Jennings, chairman of Thames Valley. “We are playing safe.”

Noble foods brought back down to size

Noble Foods was created by the merger of Deans Foods and Stonegate, the two largest egg companies in the UK, in June 2006.

In an interview with Poultry World, chief executive Michael Kent spoke of driving economies of scale, expanding the free-range sector and returning more profit to stakeholders. He was optimistic the Office of Fair Trading would buy these arguments.

But that proved wishful thinking and, by September, the OFT had referred the merger to the Competition Commission for further investigation.

Producer views, reported in Poultry World, were mixed. Some claimed it was the end of choice for farmers, others believed it would create more efficiency. The NFU said it supported the combined company and felt the industry would stand on a better footing with Stonegate and Deans as one.

But in April 2007, the Competition Commission ruled Noble Foods must sell Stonegate to create a viable competitor. In July 2008, Pam and Richard Corbett bought Stonegate.

Fraud at the heart of the egg industry

In Poultry World’s December 2006 issue, our lead story was a report that two men and one woman had been arrested on suspicion of conspiracy to defraud. The company under investigation was not named, but already links had been suggested with Heart of England Eggs, a packer which, at the time, strongly denied any wrongdoing. It had, however, left the British Lion scheme after an unannounced audit.

An article in April 2007 asked if egg fraud was a wide-scale problem. Reporter Caroline Lovell said a DEFRA investigation had found eggs being imported into the UK and sold as British free range.

Two men had been arrested the previous month, charged with perverting the course of justice in relation to the case.

Charles Bourns, the NFU’s poultry chairman at the time, said: “I wonder what the hell the 26 egg marketing inspectors are actually doing?”

It wasn’t until April 2010 that the full story emerged. Keith Owen, of Heart of England Eggs, was sentenced to three years in jail and a fine of £3.25m. He was convicted on three counts of false accounting.

The fraud led to the British Lion scheme tightening its audit measures, introducing unannounced inspections, a new database for tracking eggs, and the stamping of eggs’ production method on farm, rather than in the packing station.

Newcastle disease had plagued the poultry industry for much of the 20th century, though by the middle of the 1960s it appeared to be under control, as an inactive vaccine had been introduced that seemed to suppress outbreaks.

But uptake wasn’t universal, and backyard poultry keepers and broiler farmers with tight margins were unwilling to meet the cost. In the winter of 1970-71, the pest returned with a vengeance, with significant market fallout.

Poultry World started including a regular column, Pest Watch, which gave an update on outbreaks and their geographical spread.

The 10 January 1971 edition reported 372 flocks coming down with the disease. The total flocks affected since the epidemic began in August the previous year had risen to 3,774.

Three months later, fowl pest had spread to every English county, as well as into Wales. Mainland Europe banned UK poultry from its shores, costing the industry an estimated £1.4m a year (about £18m today). And, as production fell, so did demand for poultry as consumers opted for other meats.

By the beginning of March 1971, the NFU had called for a full-scale, independent review into this latest outbreak and its cause.

Graham Radford, in a May article for Poultry World, said sporadic vaccination was the chief cause. He felt less than 50% of the national flock had been vaccinated. “The industry was insufficiently protected to withstand a strong challenge from the disease and the inevitable happened,” he wrote.

But the real hardship came when movement restrictions were put in place, cutting off pullet rearers from their customers, and broiler farmers from the processing plants.

“The ban, which is designed to prevent the spread of fowl pest to relatively disease-free areas, has put a barrier across the south-west peninsula of England, across the northern counties, and down the Welsh border,” Poultry World complained.

Ross Poultry circumvented the restrictions by airlifting 60,000 chicks into the South West via helicopter – an operation which reportedly cost £12,500.

The movement restrictions were criticised by the British Chicken Association, the National Association of Poultry Packers and the Poultry Stock Association, which described them as “ill conceived” – a move that would “do little, if anything to curb the spread of the infection”.

But the NFU welcomed the ban. Its position was that vaccination would eventually lead to control. Some producers were also in favour, and certainly the industry coped, reallocating rearers, producers and processors within each region.

The ban was lifted at the beginning of July, as the number of outbreaks dropped. More widespread vaccination suppressed the disease slowly over the following decade.