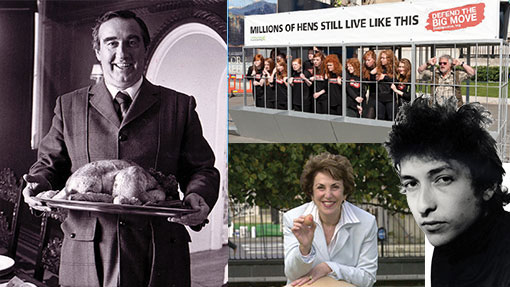 The late Bernard Matthews is the poultry sector’s greatest “blast from the past”, the Lion Scheme its greatest development – and readers of Poultry World have no taste in music.

Those are just some of the conclusions from our “Greatest” survey, run over the past month to determine who and what our readers rate as the best in the history of our industry.

Other key findings were that turkey stalwart Derek Kelly of Kelly Turkeys is considered the greatest living poultry person, while the most important technical development has been the introduction of live vaccines for turkeys and boilers. The greatest challenge facing the sector is feeding the world.

On a lighter note, we also asked you to vote for the greatest poultry brand and for your favourite chicken song.

On the first of these, it was honours even between the egg and meat sectors, with Happy Eggs from Noble Foods and Kentucky Fried Chicken from Colonel Sanders sharing the top spot.

But the greatest surprise was in the music category, where readers voted overwhelmingly for The Birdy Song by The Tweets. How anyone could rate that above Lay, Lady Lay by Bob Dylan – which came last – is beyond all comprehension. 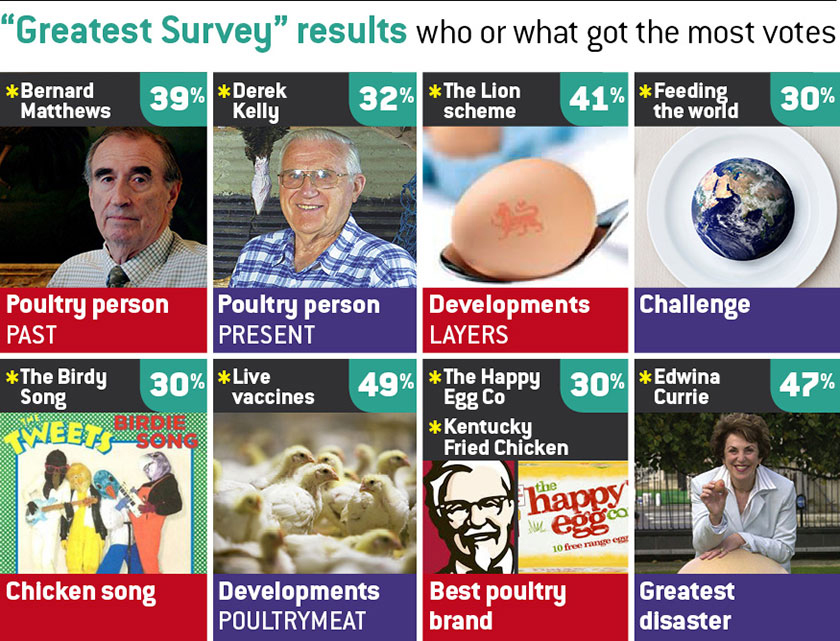 As well as asking readers to vote, we also gave them the opportunity to comment, which threw up some interesting observations.

In the “Poultry person – past” category, Martin Humphrey – whose business generously sponsored the survey – spoke highly of John Eastwood. “Where would we be without this pioneer?” he asked.

Janice Houghton-Wallace from Dumfries and Galloway agreed, saying that John Eastwood’s work on the hybrid layer had “provided the world with one of the most useful foods ever – the egg”.

Derek Kelly was the popular choice in the “Poultry person – present” category. “Not only did Derek pioneer turkeymeat, he also pushed for good welfare along with efficient production,” said one admirer. “Does so much for the turkey industry, far above anybody else,” said another.

Not surprisingly, 2 Sisters Food Group boss Ranjit Singh won some plaudits too, described as “a master of what he does, respected by all in the sector”. And ex-NFU poultry chairman Charles Bourns was praised for “dedicating his working life to better the industry”.

The Lion Scheme attracted a lot of positive comment. BFREPA chairman Roger Gent described it as “the UK jewel in the crown”, while Moira Bennion from Gloucester praised it for “securing our position as a salmonella-free country”.

There were a number of comments in relation to brands, with one reader voicing support for the Happy Egg, “because I produce eggs for them”. KFC was described as “brilliant – a multibillion dollar restaurant chain focused on chicken”.

And then we come to the “Chicken Song” category.

Free Bird by Lynyrd Skynyrd was a popular choice, prompting one reader to declare it “one of the greats”. The Chicken Song by Spitting Image was also praised for its “brilliant melody”. But The Birdy Song by The Tweets was the runaway winner, even securing a vote from NFU poultry board chairman Duncan Priestner, though at least had the decency to declare “I hate the song!”