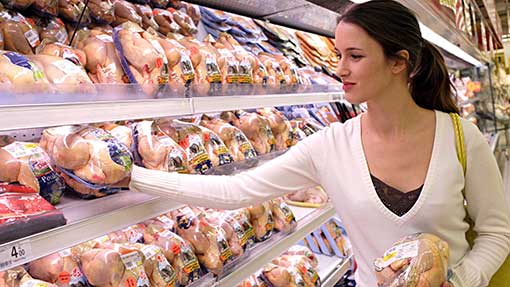 The low price of poultrymeat on shop shelves has “nothing to do with supermarket price wars”, according to Andrew Large, chief executive of the British Poultry Council.

Mr Large was commenting as the BPC released a new analysis of the cost of chicken to consumers since January 1987, finding its price had risen by an average of just 1.8% each year.

This was compared with 29 other food categories and found to be the lowest in total over that period, at 46.6%, compared with 186.4% for sweets and chocolate and 153.6% for soft drinks, for example. Poultry also performed better than other meat categories.

Data was sourced from the Office of National Statistics.

“Let’s be clear, this slow rate of growth is due to improved industry efficiencies over the past 26 years that have been passed on to consumers,” Mr Large said. “It has nothing to do with supermarket price wars.”

See also: Chicken price rose half as fast as other meat

“Poultrymeat remains the best value meat for families in the UK. The UK poultry industry is committed to providing a wide range of tasty, nutritious and affordable products and offering consumers choice. We are proud that almost half the meat eaten in the UK is poultry and look forward to increasing our sales in 2014.”

In the May edition of Poultry World , we surveyed a number of senior industry figures as to their feelings on supermarket “price wars”. While most said promotions were not currently deeper than in previous years, there was anticipation of further cuts and a tight market in 2014.