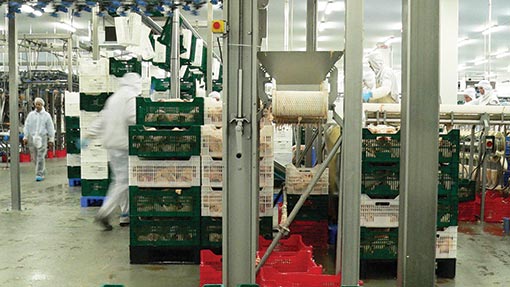 Import levies should reflect the differences in welfare standards when it comes to international trade in poultrymeat, according to a new economic analysis. Philip Clarke reports

The EU poultrymeat sector is in danger of being undermined by cheap imports from countries with lower welfare, if Brussels signs up to trade deals designed to cut tariffs and expand import quotas.

The extent of the cost disparity due to tighter EU regulations, and the potential effect of lower tariff barriers, is explained in a new report from Wageningen University in Holland, commissioned by European poultry body, AVEC.

“With EU bird welfare standards increasing, it is essential to guarantee fair competition,” says the report. “Further market access or lower import levies granted to countries that do not meet our standards will continue to weaken the competitive position of the EU poultrymeat industry. This will put at risk a sector employing more than 300,000 EU citizens.”

And it’s not just about welfare, says Cees Vermeeren, secretary general of AVEC. “We also need to take into account feed costs, and the fact that third country producers are allowed to use meat and bonemeal, as well as having a wider range of GMOs.”

Just meeting EU legislation is put at over 5% of the total cost of production, due to things such as nitrates and ammonia restrictions, salmonella controls, the ban on meat-and-bonemeal, the loss of antibiotic growth promoters and lower stocking densities.

To evaluate this impact, the Wageningen study has calculated the actual cost of producing a kilogramme of poultrymeat in the EU and in third countries. It estimates that it costs on average €1.6/kg carcass weight to produce poultry in the EU. By comparison, Argentina is only 71% of that total, with Brazil (72%), Ukraine (77%), USA (80%), Thailand (84%) and Russia (92%) following closely behind. 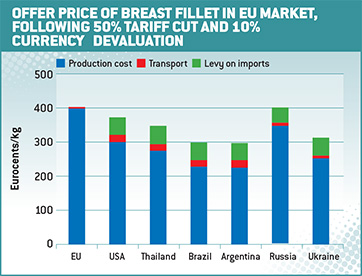 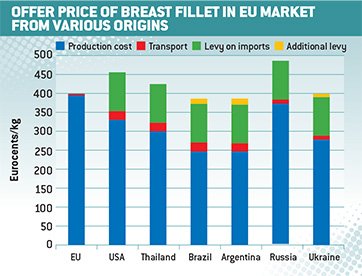 The analysis also looks at the actual offer price of breast fillet to the EU market from these countries, once all transport costs and import levies have been included. In two cases – Brazil and Argentina – shippers are already able to undercut local producers. As the graph shows, the USA, Thailand, Russia and Ukraine are also pretty close.

The analysis then considers a number of scenarios involving possible changes to import levies and exchange rates.

“In the worst case scenario, (involving a 50% tariff cut and a10% weakening of the euro), all third countries obtain a ‘competitive’ to ‘strongly competitive’ position on the EU market for breast fillet,” says the report.

“Imported poultrymeat from third countries is brought in frozen condition, so it cannot be used for the fresh-food market,” it adds. “However, Ukraine could have a different position. The distance to some EU countries is so close that export of fresh poultrymeat could be an option.”

These cost and welfare differences are a particular concern, given the fact the EU Commission is engaged in numerous trade negotiations, designed to open up the market for agricultural goods. These include the World Trade Organisations talks (currently stalled, but with some signs of getting back on track), the Mercosur talks with South American countries (definitely back on track), ongoing talks with the USA (well on track) and an access agreement with Ukraine (already agreed, but not yet ratified as the country descends into civil chaos).

The EU is a large importer of poultrymeat, mainly boneless breast meat, from all these areas. Currently, the vast majority of imports take place under a quota licence system with greatly reduced or no import duties at all.

According to Mr Vermeeren, the major concern is how individual deals with specific countries or regions may then be integrated into a future WTO agreement. Each bilateral agreement will involve giving third country producers additional import quotas at zero or reduced rates of tariff. His worry is that these are all adding up and could well exceed any future WTO quota. It is unlikely they will then be scaled back down again.

He is also adamant that certain food products, including poultrymeat, should be awarded sensitive product status to afford them some protection from any future tariff cuts. But he concedes that it would be too complex to develop a system that sets different levels of import tariff for countries applying different welfare and environmental standards. “We have to be realistic,” he says.

But overall, AVEC believes that a trade agreement can only be fair and justified if there is the right balance between import levies and the difference in legal standards for EU and non-EU poultry, a view which is supported by the Wageningen report.