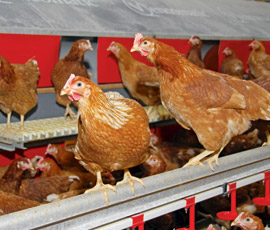 Pullet rearers have reacted angrily to a letter from the Environment Agency, warning them that they could be fined up to £50,000 if they supply more than 40,000 birds to poultry sites that do not have the necessary environmental permits.

Under EU law, anyone with a unit of this size or larger is supposed to have an integrated pollution prevention and control (IPPC) permit. But, according to the EA, there have been a number of breaches, and cases of pullet rearers supplying these farms with too many birds.

“Companies supplying more than 40,000 birds to an unpermitted site could be committing an offence of knowingly causing the operation of a regulated facility without a permit,” says the letter.

“Similarly, companies supplying more birds than allowed under a permit could be committing an offence,” it adds. Pullet suppliers could be liable for fines of up to £50,000 if found guilty in a magistrate’s court.

“I recommend that you check whether your customers hold an environmental permit, if required,” says EA lead technical adviser Alison Holdsworth in the letter. “If the site does not hold a permit, then you should not supply more than 40,000 birds.”

But pullet rearers have complained that they are effectively being asked to police their customers on behalf of the EA.

“Being the Environment Agency’s policeman is not a role that we want,” said Keith Henderson of Blue Barns Poultry Farms. “It puts the onus on us when we might not know how many birds a producer is keeping.

“A farm many have well over 40,000 layers, but we may only be supplying half of his pullets. So who’s at fault then? We think it is the customer’s responsibility as we deliver in good faith.”

Chris Brenton of Stonegate, who also chairs of the Pullet Rearers’ Association, added that the government and its agencies already knew how many birds each farm had from the Poultry Register. “Ultimately it is down to the customer to meet the law. It is unfair to turn on chick companies and pullet rearers and try and draw us into the problem.”

And Steve Carlyle of Country Fresh Pullets said the situation was exacerbated by the fact that the IPPC permit was related to the holding capacity of a farm, not the actual number of birds on it at any one point in time.

Another issue was that, while the EA’s website lists all those companies that have an environmental permit, it does not specify the number of birds that are covered.

Last year the EA sent similar warning letters to hatcheries, after producers complained they were being put under pressure to take more than the number of birds they were permitted for. This prompted a similar outcry from the hatcheries.

Further details of farms with environmental permits can be obtained from the EA’s register or by calling 08708 506 506.