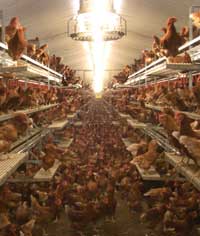 The type of lighting used in poultry sheds is all too often overlooked, despite its importance for bird performance.

“Basically, they can see more pictures than people can. Sometimes they see 100 to 150 pictures per second, so this means the birds can see when the light is on or off on units using old fluorescent tubes working with electro-magnetic starters,” said Dr Thiele. “At 50Hz, the light flicks on and off 50 times a second and the birds can see this happen. This ‘disco effect’ makes the birds nervous.”

Dr Thiele said the stress caused by poor lighting can be the final factor that pushes birds into a range of problems including nutrient deficiency and aggression, especially in early lay.

Producers can avoid these problems by using lights which flash at a faster rate, up to 5000Hz, which is too fast for the birds to register a change.

Increasingly, producers in the UK and elsewhere are using LED lights as a solution, but Dr Thiele offered caution about their early adoption.

Even though they are low cost in terms of power usage and are long lasting, they can be expensive to buy. “I’m not sure if the technical development of these LEDs is advanced enough yet to give the birds the full spectrum of light,” said Dr Thiele.

“If you give hens only part of the spectrum, then they can be affected. In open house flocks, where you have the full spectrum of light, the fertility of birds is higher than in closed house conditions. Birds in the closed house are missing the UV spectrum and the females can’t pick the strong males with good genes because the can’t see the wing and tail feathers.”

LED lights and traditional fluorescent lights don’t give off any ultra-violet light either, and this can have an adverse effect. “The birds can see UV, which we can’t see. This is so seeds stand out more on the ground and they can tell the different between rocks and food. If you give them only part of the spectrum, then they are affected,” Dr Thiele said.

“Whenever you work with lamps that have a filter you limit the birds’ faculties.”