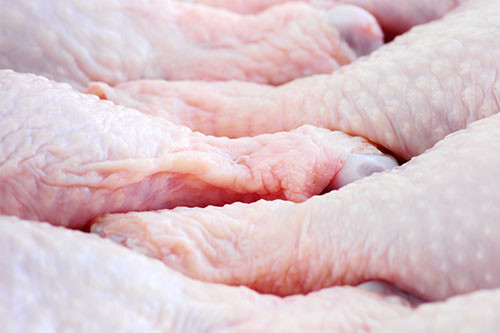 The study involved 339 samples of raw chicken (whole or portions) that were collected between the beginning of September and end of October last year from retailers in England, Wales, Scotland and Northern Ireland. Photo: Monkey Business Images/REX/Shutterstock

However, the Food Standards Agency report said the risk of acquiring AMR related bacterial infections from these foods was very low provided they are cooked and handled hygienically.

The study involved 339 samples of raw chicken (whole or portions) that were collected between the beginning of September and end of October last year from retailers in England, Wales, Scotland and Northern Ireland.

These were tested for Escherichia coli, Klebsiella spp. and enterococci, as well as Campylobacter spp. One isolate of each bacterial type from each sample was randomly selected for additional testing to determine the minimum inhibitory concentration (MIC) for a range of antimicrobials.

E. coli were detected more frequently in chicken samples (165/339) than in pork mince (35/342). Of isolates examined for MIC determination, a higher percentage of those from chicken had resistance to ciprofloxacin (26%), nalidixic acid (25%) and gentamicin (7%) compared to those from pork (13%, 3% and 0%). In contrast, resistance to chloramphenicol and tetracycline occurred more often in isolates from pork than from chicken.

In contrast, Klebsiella species were detected more frequently in pork mince (127/342) (37%) than chicken (22/339) (6.5%). Of the 85 Klebsiella isolates examined for MIC determination, rates of resistance were lower than observed in E. coli isolates for all antimicrobials tested, with the exception of ampicillin, to which Klebsiella species are intrinsically resistant.

The survey took place following an authoritative report by a group established by the Advisory Committee on Microbiological Safety of Food (ACMSF), which in the spring made a number of recommendations to the FSA.

Commenting on the findings, Steve Wearne, FSA direct of food policy, said that as well as reducing antibiotic use on farms it was important to understand the role that food plays in AMR.

“We are working with the Quadram Institute in Norwich to understand how resistance arises and how resistant bacteria survive and are transmitted through the food chain.”

Mr Wearne praised the food and farming industry for taking its stewardship role seriously: “The use of antibiotics in the poultry meat sector declined by 82% between 2012 and 2017 and antibiotic use in UK pigs has halved between 2015 and 2017. There is still more for industry to do and we are challenging all food production sectors to go further to reduce the levels of antibiotics they use to help with the fight against AMR.”

Gwyn Jones, chair of the Responsible Use of Medicines in Agriculture (RUMA) Alliance, said the FSA’s new research would add to the bank of knowledge and help identify additional interventions that reduce any antimicrobial resistant bacteria in food, while safeguarding continued access to antibiotics that treat disease and prevent pain or suffering in animals.

Richard Griffiths, British Poultry Council chief executive, added that the sector was upholding the UK’s position at the forefront of international efforts to keep antibiotics effective for future generations and tackling antimicrobial resistance.

“Through the BPC Antibiotic Stewardship, we’re trying to better understand the link between antibiotic use and resistance in poultry production chain.”

The FSA will be discussing AMR at its meeting in Cardiff on 19 September.