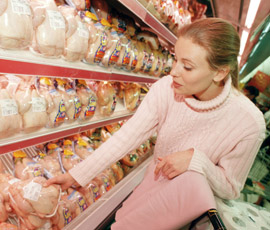 Tesco has been branded “hypocritical” by Irish poultry farmers for its commitment to source all UK-sold fresh poultry from the UK, but not doing the same in the Republic of Ireland.

A number of supermarkets, such as Aldi, SuperValu and Superquinn, have made commitments to only source fresh poultry from the Irish market, but Tesco has not.

This is putting pressure on prices in Ireland and surplus poultrymeat from the UK is being dumped on their market, according to Alo Mohan, chairman of the Irish Farmers’ Association poultry division.

He said supermarkets in the UK should be commended for their promises to shorten the supply chain and commit to their domestic market – particularly Tesco sourcing only fresh Scottish chicken in Scotland.

But Tesco not making the same promise in Ireland was “a little bit hypocritical”, Mr Mohan said, adding, “all we want is consistency”.

Poultry World asked Tesco if it had any plans to replicate its UK-only fresh poultry promise in Ireland. It did not respond specifically, instead issuing this statement:

“Working with over 11,000 Irish farm families, Tesco is proud to be the biggest supporter of Irish farming in the home and export markets. All fresh beef, pork and lamb and fresh milk sold in Tesco stores is sourced on Irish farms.

“All of our fresh chicken is sourced on the island of Ireland, and is Bord Bia quality approved. More than half of this originates from producers in the Republic with sourcing growing by over 30% in the last year. We are committed to growing the sales of chicken produced in the Republic of Ireland.”