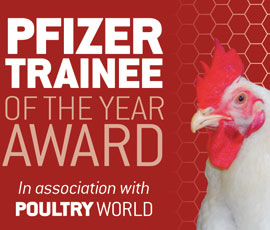 The paper entries have been assessed and the judges have chosen three young trainees who will now go forward to the final stage of the Pfizer competition.
Roger Ranson tells their stories

Nobody can doubt Greg Pennington’s thirst for knowledge – even when this involves researching the behaviour of laying hens throughout the 24-hour cycle.

As assistant manager on the Oaklands Farm Eggs’ unit at Harper Adams University College at Newport, Shropshire, he works on an experimental unit where the 66,000 hens live in enriched colonies ranging from 20 to 100 birds. 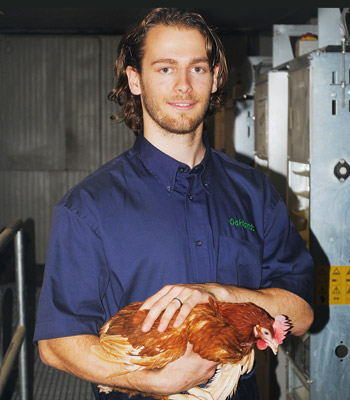 He monitors pullet behaviour, nest preference and usage, laying patterns and feather score, as well as aspects of production. He is able to compare this temperament and behaviour with 7,000 hens in a barn system at Oaklands.

“Greg is able to formulate evidence of hen behaviour in our colony system and barn units,” says Elwyn Griffiths, financial and technical director of Oaklands Farm Eggs. “He works at obscure times, often seen in the sheds in the middle of the night when everybody else is asleep.

“When questioned why he keeps these nocturnal hours, he explains that hens do not work 9am-5pm and you need to observe them 24 hours a day.”

Mr Griffiths says that Greg is a young man with a very mature outlook. “He has a great keenness for new and innovative ideas. Having watched the complexity of egg production from a close proximity as a schoolboy, his knowledge is now etched in stone.

“I certainly believe the Pfizer Trainee Award would give Greg a great boost of confidence and he would feel rewarded for the hours of work he gives to his research.”

Greg, who is 21, began working part-time for Oaklands during school holidays when he was 13. He started full-time four years ago, initially in pullet rearing. During his third year he became responsible for managing multiple poultry units with an overall capacity of 275,000 pullets, then moving on to the Harper Adams unit.

As well as his routine duties, he organises site visits and tours for college students and more than 1,000 visitors a year from UK and overseas businesses, including supermarkets.

Alongside the work, Greg has stepped up his training, initially taking courses at NVQ level 2 in food hygiene, pest control and pesticide handling and then progressing to studies for an NVQ level 3 diploma in poultry production. In his spare time he has widened his knowledge through attending industry conferences and organised tours.

His training provider, Jackie Colwell of Lohmann GB, has found him an enthusiastic, self-motivated diploma candidate. “Greg has proved both resourceful and dependable in his approach, always keen to learn and sourcing much of the evidence himself,” she says.

He has now secured a place at Harper Adams to begin his foundation in agriculture, leading eventually to a BSc degree.

“At present he enjoys the challenges of everyday problem solving of a poultry unit whether it be rearing, barn laying or, latterly, a laying cage system,” adds Ms Colwill. “He has ambitions of management and continuing in research.” 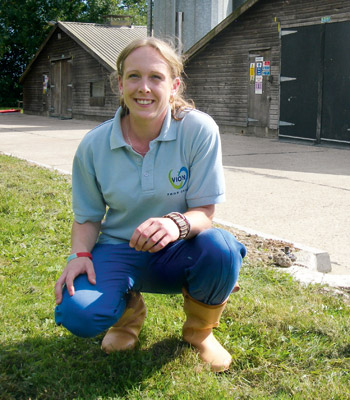 Rachel Almey rediscovered her passion for working with chickens when she was given the chance to become involved in managing broilers.
She had worked alongside her father Stuart on broiler farms, then took on various roles at a vegetable production plant and motor maintenance garage before returning to work in a poultry processing plant.
Rachel began working for the Vion Food Group plant at Eye, Suffolk, in 2009. She gained experience in different departments, becoming a supervisor. But that wasn’t where she saw her future.
“When I first met Rachel, she told me about how she’d like to move over to the broiler farms,” recalls Werner Strydom, Vion’s regional broiler manager. “She impressed me so much that I organised for her to go and visit our Foulden site.
“Shortly afterwards she gained the role of assistant farm manager. With her dedication, hard work and her unquenchable thirst for knowledge, she very quickly became a key part of the team. But when the position at Laxfield Farm became vacant, Rachel made no secret that she wanted to have the opportunity to manage her own farm.”
The unit grows chickens to the Elmwood higher welfare standards. It is one of the company’s older farms, built more than 40 years ago, with houses ranging from 6,000 to 14,500 birds.
“The first crop that Rachel was responsible for at Laxfield Farm saw her break the company record,” says Mr Strydom. “Considering half the birds were reared on track feeders, this makes it an even more impressive result.
“Rachel does not miss anything and this is what makes her such an exceptional farm manager.”
Rachel is completing an NVQ level 3 work-based diploma in agriculture. Colin Emberley, agricultural assessor with Poultec Training, says that she has shown good communication skills in all areas of her work and a good knowledge of the poultry industry.
“Running the Laxfield site, Rachel is forward thinking and has shown competence throughout her diploma in all the different areas of her work, following legislation and company procedures along the way.
“I see Rachel continuing to get great results on her site for Vion, with an opportunity to climb the ladder within the company if she wishes.”
Rachel has benefited from seeing at first hand in the processing plant how important it is to achieve good, consistent performance on the farm. “This has helped me a lot in understanding how important it is to provide accurate information and how problems on the farm can affect factory production,” she says.
If she wins the Pfizer Award, she would use the grant to progress her knowledge of poultry. ”I have a great interest in bird welfare and would like to learn more about genetics and the veterinary side of the business,” she says. “I am also interested in parent and grandparent flocks.” 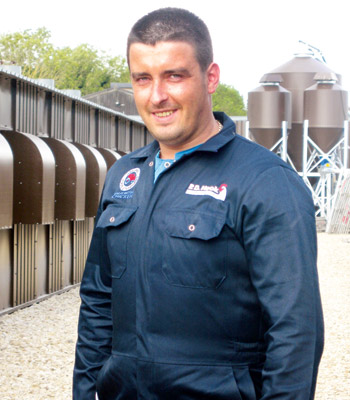 Seven years ago Julius Salamachinas came to the UK from Lithuania with his wife and child seeking a better future.

He was 21 and had to start learning to speak English and sought work in agriculture, initially on a farm growing potatoes and apples. Then in 2006 he heard from a contractor about a vacant farm worker position with PD Hook (Breeders) at the 18,000-bird Cornhill broiler breeder farm near Hereford. He enjoyed the work and took to the job very quickly.

In August 2011 he moved to the Pyrton unit near Burford, Oxfordshire, to become one of the company’s youngest farm managers, responsible for 21,000 breeders and two members of staff. With good demand for British chicken, this farm was earmarked for expansion. Two new sheds have been added this year and are ready to receive their first birds this month (September), taking the capacity up to 32,000 breeders with four full-time and two-part time members of staff.

“Julius has a great work ethic and leads by example, working well in a team and under pressure,” says Patrick Hook, area farm manager, Southern Breeders for PD Hook. “He listens and takes on board advice at all times, and is always keen to develop his understanding of broiler breeders. His first two flocks were a challenge and his resilient nature and hard work have paid off, as he has just produced one of the best performing flocks in the southern region.”

Carl Fryett, agricultural assessor at Poultec Training, has been Julius’s assessor for the past three years. “Julius has a good attitude towards learning and always provides a good level of knowledge throughout his tasks,” he says.

“I have seen Julius grow from a stockman through to manager and during this time increase his knowledge and confidence within the area. He has shown a great level of commitment and a stern attitude towards achieving and maintaining a good reputation within a hard industry. He is relentless in his quest to be one of the company’s best breeder farm managers.

“Julius is always looking for progression options and courses that he can do to improve his already successful career. I believe it is people like Julius that demonstrate the reason why training is so important and what can be achieved if you are dedicated and have the drive to progress.”

If chosen as the winner, Julius would use the Pfizer Trainee Award to help develop his managerial skills in two ways.

“I would like to take an English course to help with my written and verbal communications,” he says. “This will help in managing people and particularly dealing with more paperwork. In the long term, I would like to do an ILM team leading and management course to develop my management skills.”

With her thirst for knowledge, she quickly became part of the team”

Four judges will be interviewing the three finalists later this month to decide who will be the Pfizer Poultry Trainee of the Year for 2012.

The winner will receive a £2,000 training grant from Pfizer to help in career development together with the award plaque at a joint presentation ceremony with the BPC at the House of Commons on 4 December.