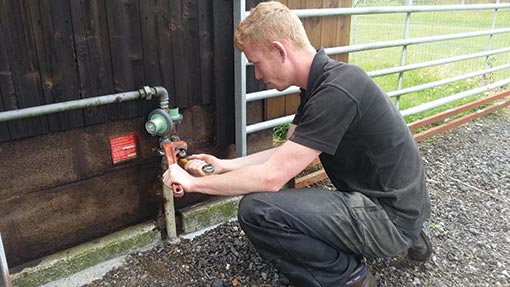 Poultry producers need to stay alert to the dangers associated with gas.

Liquid propane gas (LPG) has long been the fuel of choice for heating poultry sheds, and continues to be an efficient, convenient and versatile solution, despite the trend towards biomass on many sites.

Even where biomass systems are installed to fuel water-based heating systems, gas heaters are often retained as back-up, either as a traditional box-heater system, or to power a standby boiler.

Producers therefore need to be aware of their responsibilities when it comes to gas, as well as some of the inherent dangers associated with maintenance, according to David Blakemore of Hexham-based Focus LPG Engineers.

“I’ve heard it said that, as agricultural premises do not come under the auspices of the Gas Safety Installation and Use Regulations, work on LPG supply pipes can be undertaken by anyone,” he says. “That is not so. The Health and Safety At Work Act clearly states that anyone performing a work task must be competent, and competence must be documented.”

This means operators should be members of the Gas Safe Register, though Mr Blakemore concedes that heater cleaning and the changing of flexible hoses may be undertaken by farm staff, providing they have received appropriate training.

One particular danger that is increasingly presenting itself is the lack of fresh air in the early stages of heating a poultry shed.

“Heaters are often serviced during crop turnround, when they are cleaned, tested and the working gas pressure is checked. The heater is left operating correctly, and with a stable flame,” says Mr Blakemore. “But I’m now getting more phone calls to say that, 24-48 hours after the new crop has been placed, the heaters are going out and can only be relit with difficulty.

“On revisiting the farm, I invariably find the heater flame is unstable and lifting off the burner, causing the flame probe to cool and thereby shut the heater down. More often than not this turns out to be a ventilation issue, with a lack of fresh air producing an imbalance in the gas/air mix at the burner – a situation which can lead to high levels of carbon monoxide.”

Further investigation has revealed that fans and ventilators appear to be being used on lower settings during the first week of the crop, presumably to increase heat retention within the house and so save gas usage.

“This is dangerous,” says Mr Blakemore. “Gas heaters require a copious supply of fresh air to function properly. For example, a single Hired Hand heater requires 350cu cm of high level and 700cu cm of low level fixed ventilation to function correctly if the forced air ventilation system within the building is not operating.”

Naturally, as the crop ages, heat requirement decreases, ventilation increases, and the problem goes away. But with new-build sheds becoming ever more insulated and heat efficient, the cracks and gaps that were present in older sheds are no longer there for fresh air to gain entry.

“Consideration needs to be given to adequate ventilation for the continuing safety of anyone working in houses during the first week of a new crop,” says Mr Blakemore.

It is now law that all LPG pipework, both above and underground, be subject to periodic inspection.

The first step is a Written Scheme of Examination, which records the LPG pipework system and the appropriate inspection intervals; typically metal pipework above ground ought to be tested annually, and buried plastic pipework every five years. “The Written Scheme sounds onerous, but it is not, and it demonstrates to the HSE that the farm owner is aware of his responsibilities.”

Then follows the periodic inspection and testing which will typically be undertaken during crop turnaround, and which will produce, if all is well, an appropriate certificate of soundness. Again, this is not an onerous procedure and can be undertaken by any Gas Safe Registered engineer having the appropriate skills set on his certificate.

Such certification could pay dividends should the poultry farmer ever need to make an insurance claim, Mr Blakemore adds.

“No one wants to think of the consequences of a fire in a chicken house, and such incidents are thankfully rare. But in the case of such an incident, the insurance company may take particular interest in any LPG installation within the house.

“If there is no documentary record of periodic inspection and maintenance, this may be used by the insurance company as a reason to reduce or refuse compensation – not the sort of thing any farmer wants to hear when faced with house rebuilding.”