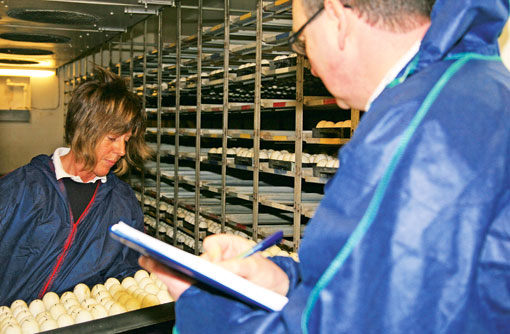 Almost 3,000 individuals have participated in the industry-led Poultry Meat Training Initiative since it’s inception three years ago, building up a range of skills appropriate to their role in the industry.

The PMTI was developed partly in reponse to the EU Broiler Welfare Directive, which was finally implemented in the UK last autumn. It had long been recognised that the directive would include a requirement for training and certification, and it made sense to introduce a voluntary system, rather than wait for government to introduce yet more regulation.

But the development was also triggered by an investigation into the most common non-compliance issues raised during quality assurance audits, which highlighted staff training and poor record keeping as being of particular concern.

The result was the formation of the PMTI, a working group which includes representatives from several major processors and growers, as well as Lantra, an organisation which provides training for the land-based industries.

The British Poultry Council and the National Farmers’ Union are also involved, while management of the scheme is provided by independent poultry training specialists, Poultec Training, which also runs some of the courses. A number of other organisations around the country also offer training which meets the industry standards, including the Minster Veterinary Practice, the Scottish Agricultural College and NFU Mutual Risk Management Services.

So far some 166 organisations have registered for the scheme, ranging from single farmer businesses, to an integrated company with 600-plus employees.

A key part of the scheme is the Poultry Passport, which was integrated into the PMTI at its launch in the autumn of 2009. An on-line system for recording staff training, it gives users instant access to their own records, which are maintained and updated on their behalf. The scheme is available to both companies and individuals, with training data updated and verified by an administrator from Poultec Training, to ensure validity.

Poultry Passports are broadly divided into four levels: Level 1 for trainees, Level 2 for stockmen, Level 3 for managers and the new optional Level 4 for area managers/fieldsmen.

A trainee on Level 1 can expect to receive training in health and safety, biosecurity and poultry welfare, as well as a short course on manual handling. These subjects are also present in Level 2 for stockmen and includes a Level 2 Diploma in Work-based Agriculture (formerly the Level 2 NVQ in Livestock Production (Poultry).

In addition, managers at Level 3 work towards attaining a Level 3 Diploma, and attend short courses in first aid and the IPPC (Integrated Pollution Prevention and Control) regulations.

Several options are available for the transfer of training information from the company or individual taking part in the scheme.

The administrator can visit the company headquarters or a large employer and input the records on-site. Alternatively, ongoing records can be posted to the Poultry Passport system headquarters. Training records are kept strictly confidential, through the use of password protection.

The cost of training varies, depending on the course selected. However grants are often available to subsidise costs, depending on geographical area. Poultec Training can assist with signposting potential applicants towards sources of funding to help pay for training, and a list of training providers around the country can be found on the Poultry Passport website.

Courses vary greatly in duration, starting with a half-day session on health and safety, for example. The City and Guilds diploma can take between six and 18 months to complete, with students required to study for a few hours a month.

In cases where individuals have already completed some training prior to joining the scheme, historic information can be added to their records. However their training must meet the PMTI’s minimum standards, and evidence of certification is required.

Companies which provide staff training in-house can have the details recorded on the scheme, as long as the training complies with the minimum standards defined by the Poultry Meat Training Initiative/Poultry Passport initiative.

British Poultry Council senior executive, Richard Griffiths, says the Passport scheme has been well received. “Feedback has been encouraging; it seems there was a gap in the market for a centralised system offering training programmes aimed at establishing minimum standards and formalising record keeping,” he says.

“We started these training schemes focusing on core agriculture, but it was always our intention to expand the programme, to include the whole supply chain. Later this year we will research the idea of providing courses for the processing sector. We have also recognised a need for fieldsmen and area manager training, which is why we are introducing the Level 4 programme. It will include courses on personnel and business management.”

Leroy Burrell of Poultec Training said he felt it was important to set up a training system to allow a worker to transfer employment from one company to the next, using documentation that would represent an industry-wide standard.

The online record-keeping system works in the same way as the traditional system of keeping paper documentation in files, he added. During a quality assurance visit, a producer or company representative can use the internet to access individual training records, which are stored on the Poultry Passport web-based system.

The company has registered approximately 250 employees under the Poultry Passport Scheme who are currently under various training scehems as part of the Poultry Meat Training Initiative. Faccenda has worked closely with Poultec Training. to successfully approve and deliver a range of the required training, while ensuring that it is fit for purpose.