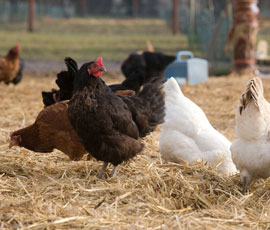 Consumers will pay a premium for higher-welfare food, but cannot be pushed too far, retail analyst Ed Garner of Kantar Worldpanel told this week’s Pig & Poultry Live event at Stoneleigh.

The fact that top-end supermarket Waitrose had seen 12% year-on-year growth, while other retailers had struggled, showed that consumers still cared about welfare and provenance.

But the balance between value and values was a fine one, said Mr Garner. Free-range eggs, for example, now accounted for two-thirds of the retail market. “It’s not niche, it’s the main thing,” said Mr Garner, pointing out that the price premium amounted to “just pennies”.

“But for organic, where it’s a more complex story and the premium is higher, the market is in free fall and its almost off the scene. There is a big difference in terms of how far you push the consumer in terms of a welfare story.”

Similarly, free-range chicken had only a limited market share because the relative premium was far higher than for eggs.

Mr Garner insisted there was still an opportunity to develop sales of higher-welfare foods. Dynamic price matching – rebating consumers at the till if they could have bought cheaper elsewhere – meant supermarkets were looking for other ways to set themselves apart.

“Welfare has got some consumer appeal – it can be a differentiator for the retailer. But one of the things you have to be careful about is that you can’t expect to charge a substantial premium for welfare. It’s nice to have, it will resonate with consumers, but if you jack up the premium, you will end up in a niche.”

NFU president Peter Kendall told the meeting that it was essential producers were properly rewarded for the investments they had already made in higher-welfare systems.

He said they felt betrayed by the EU Commission, which had failed to enforce the sow stall ban and the battery cage ban properly. And he criticised supermarkets for selling imported poultry, raised at a stocking rate of 42kg/sq m on the continent, while Red Tractor growers had to stick to 38kg/ sq m.

“We must make sure we don’t raise standards here in the UK to meet the demands of a group of people in a coffee bar in Notting Hill, and just export our industry to where standards are different and product then comes in and puts British farmers out of production.”

Julia Wrathall of the RSPCA said it was essential the food chain pulled together to educate consumers properly, rather than play on their perceptions. Some consumers believed that only outdoor production could be high welfare, and indoor was low welfare. “It’s much more complex than that, and there are pros and cons to each system.”

Overcoming these perceptions would require more openness, the use of videos to show people modern farming and proper labelling to let them make an informed choice.