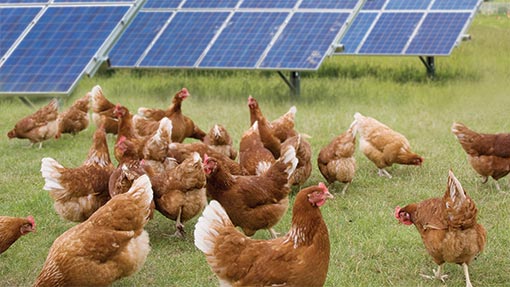 On-going cuts to support for renewable energy may lead many farmers to think there is little point in investing in new projects.

But, while the Feed-in Tariffs (Fits) and Renewable Heat Incentive (RHI) payments are subject to regular cuts under the government’s “degression mechanisms”, experts believe there is still a strong case for investing, especially where there is a large on-site electricity or heat use.

The relatively high energy demands on poultry farms means they could still be ideally placed to benefit from technology such as solar photovoltaics, wind, biomass heating or anaerobic digestion, especially as fossil energy prices continue to rise.

Indeed, a recent report from the National Grid suggests that wholesale electricity prices could double over the next 20 years, from about £50/MWh to £100/MWh by 2035, in part due to the closure of more coal-fired power stations. The “UK Future Energy Scenarios” report also forecasts wholesale gas prices could increase 43% over the same period, from £70 /therm to about £100/ therm.

With farmers typically paying 10-12p/kWh for electricity, displacing as much as possible either through renewable generation or better energy efficiency on-farm makes financial sense, even with further cuts to support payments, says the Farm Energy Centre’s Andrew Kneeshaw.

“That displacement value goes up with the price of energy which has historically been higher than inflation, which the Fits and RHI is linked to,” he says.

But before making any investment in renewable energy technology, Mr Kneeshaw advises farmers to do a farm energy audit, to better understand energy use within individual parts of the business, highlight specific areas for savings and identify where renewable technology could fit in best.

While maximising on-site electricity and/or heat use will improve returns from renewable projects, Mark Newton of land agents Fisher German says farmers should still act quickly if they are considering a new investment in order to secure higher Fits and RHI payments. “Fits are dropping and will continue to do so, therefore the longer you leave it, the further they’ll decrease.”

He believes any project should deliver a return of at least 10-12% to make it worthwhile proceeding, but says that most of the main technologies still deliver close to that in the right situations.

“Wind has historically given the best return and it still does, but planning remains a big issue.” Turbines larger than 50kW, where there is roughly a 50:50 split between on-site energy use and exported electricity, can still deliver returns of 15-20%, he says. But cuts to Fits have hit smaller turbines hard and he suggests sub-50kW turbines will struggle to be viable.

Solar PV remains the most straightforward technology to invest in – especially on poultry houses – as it requires minimal maintenance and smaller (sub-50kW) arrays can be erected without planning permission. Returns are typically about 10-15%, depending on how much energy is used on-site or exported to the grid. “If you use 100% on site returns go up enormously,” he says.

Wind and solar also complement each other well due to the differences in peak energy generation throughout the year, Mr Newton adds. “It can be worthwhile having both running alongside each other if you’re in a position to do so.”

In terms of renewable heat generation, biomass boilers and anaerobic digestion are the two main options for poultry farmers, with both giving returns of about 10-15%.

But with AD, 50% of energy produced is heat, so maximising heat use alongside the electricity generates more income (or savings from displaced bought-in energy) and allows both RHI and Fits to be claimed, boosting returns to nearer 20%, he says.

“There are lots of opportunities for AD, but key factors are the security of feedstock supply and land to spread digestate.”

Grid connection remains one of the biggest challenges for all technology types, especially larger projects, and will increasingly be a limiting factor as more projects come online and use up remaining grid capacity.

Strutt & Parker partner and senior engineer Kieran Crowe advises anyone planning a new energy project to speak to their Distribution Network Operator (DNO) at the earliest opportunity to check whether the local network and infrastructure is sufficient. If an upgrade is required, the DNO will provide a quote for how much work will cost.

“Don’t wait until installation of your project begins before contacting them, as it may take several months for grid upgrade work to be done, especially in the winter when companies tend to spend more time maintaining existing infrastructure.”

Note: The higher rate applies if neither of the following conditions apply:

Energy efficiency: The lower rate is payable where the system provides power to a building, and the building does not have an EPC certificate showing its energy efficiency in bands A to D

Multiple ownership: The medium rate (90% of the higher rate) is payable where the system owner has a total of 25 FiTs-registered PV installations

Note: The Tier 1 biomass tariff is paid until the system has operated up to 15% of the annual rated output (so equivalent to 1,314 hours at the rated capacity of the installation). Tier 2 applies for the rest of the output in the year.