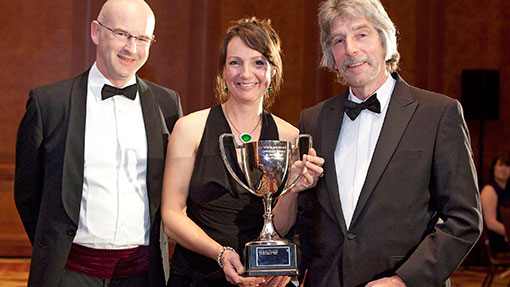 Cornwall-based free-range egg producer/packer Rebecca Tonks has been named the Epic Young Poultry Person of the Year, awarded each year to an individual who has made a significant impact on their own business and a contribution to the wider industry.

The award, which was established in memory of the late Clive Frampton of the Frampton’s egg processing business, was presented at this week’s Egg and Poultry Industry Conference at the Celtic Manor Hotel in south Wales.

“Since then the business has well and truly taken off, winning new business with all the major retailers, doubling turnover and tripling profits in the past three years alone.

One such brand is Boost the Roost, the UK’s first selenium enriched egg, developed by Rebecca and her team to meet a genuine human health need and extending the trading area beyond the south-west.

St Ewe has also taken on contracted egg producers to meet its growing order book, paying them a premium price to help support their businesses in an economically challenging part of the country.

As well as running a thriving business, Rebecca is also involved with a number of organisations locally, including the Cornwall Agricultural Council, Cornwall Food and Drink, Taste of the West, the NFU and Bfrepa.

The award was presented by Elwyn Griffiths, chairman of the British Egg Processors Association.