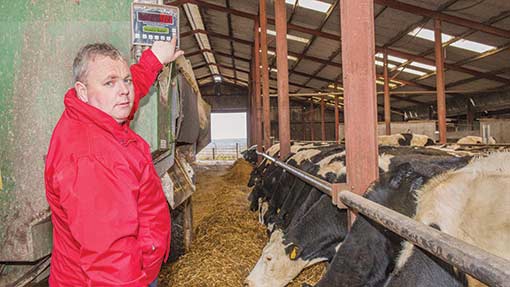 Irish dairy farmer Pa O’Brien admits he is not the most adept at new technology, yet he’s using it to revitalise his business with a more precise approach to nutrition.

Mr O’Brien, based in Ballymacoda, East Cork, is one of 25 dairy producers taking advantage of the SleepEasi programme, which aims to improve animal health, feed conversion efficiency and operational performance.

SleepEasi is an alliance between the Irish Co-operative Dairygold and Keenan, the feeder wagon specialist, to help grassland-based dairy farmers prepare a growth strategy to cope when the quota ends in 2015.

Dairygold buys milk from Mr O’Brien for cheese production and sells him feed and fertiliser as well as providing on-farm advice. It has teamed up with Keenan to offer a feeding system that aims to boost farmer profit by producing more milk from less feed while minimising incidence of metabolic challenges.

Ireland hopes to expand its milk production by an ambitious 50% by 2020. This will be achieved through a combination of strategies – improving grass management to boost milk yield per acre, increasing herd size and by lifting yield per cow through feed efficiency or more concentrates.

Dairygold is also convinced the expansion will be underpinned by farmers taking on new technologies and doing things differently to be more efficient.

Mr O’Brien has a spring calving herd of 183 cows averaging 6,000 litres a cow, feeding 1t of concentrates a cow with a high stocking rate of 1.4 cows an acre on the grazing block.

Some years ago, he faced the choice of buying more heifers to expand or optimising yields on his existing herd by changing his feed management system.

He chose the latter as the less risky option. Since joining SleepEasi earlier this year he has seen improvements in cow health at the same time as extra milk gains.

The programme provides a total diet formula to improve digestion and minimise waste. Herd performance is monitored and any deviation from the target set is immediately tackled.

Mr O’Brien monitors herd performance via a PACE computer attached to his feeder wagon. It shows him the correct sequence of ingredients to go into the feeder wagon, the number of revolutions of the mix to get a uniform ration and the right forage chop length to help the cows deliver more milk for each kilogramme of dry matter fed.

Dairygold’s nutritionist Colman Purcell worked with Mr O’Brien to tailor the TMR exactly right for his cows. The ration formula is then sent straight from a laptop to the PACE box via SIM card or internet. Mr O’Brien simply switches on PACE, chooses the ration and is asked to input the number of animals to be fed in that load.

Fuel and feed waste is reduced because the wagon automatically shuts down when the required mixing level has been achieved. The PACE box records all the details and sends back the results of the mix via the mobile phone SIM link to Keenan’s In Touch Centre, which collects and monitors the data.

Accurate data on the feed that is used is stored on all the SleepEasi producers so performance is benchmarked. Feed conversion efficiency can be worked out on each farm in real time by putting in production figures.

The Keenan and SleepEasi nutritionists check each farm’s progress and identify any discrepancies to follow up with the farmer.

Dairygold and Keenan believe their alliance is leading to real profitability changes by cutting waste and increasing milk output. They also claim SleepEasi farmers can get the same level of milk outputs from 10% less feed. In the UK, Keenan reckons this is worth an average of 2p/litre or 50p a cow a day.

Mr O’Brien’s consistent ration includes straw, grass silage and dry cow minerals, and he thinks this is leading to animals being in better condition and to easier block calve. Reducing the incidence of metabolic challenges around calving is also targeted with SleepEasi.

The coming calving period will be the first time to see the post-calving metabolic impact of the SleepEasi dry cow nutrition plan.

“I went for this because it was a simple system, so easy,” says Mr O’Brien. “I can ring and get [nutritionists’] support at any time. They are reading the data and spotting any problems early and making suggestions to correct things.”

Mr O’Brien says fertility is excellent, with a 2013 herd empty rate of just 8% despite a very tight calving spread. This fertility performance outperforms the Irish national target of a maximum 10% empty rate. It is also over half the 17% average empty rate achieved nationally in Ireland in 2012.

Mr Purcell claims SleepEasi is delivering positive feed efficiency returns. Milk yield has increased by 345 litres a cow in 2013, and is worth an additional 1.6c/litre of total milk produced.