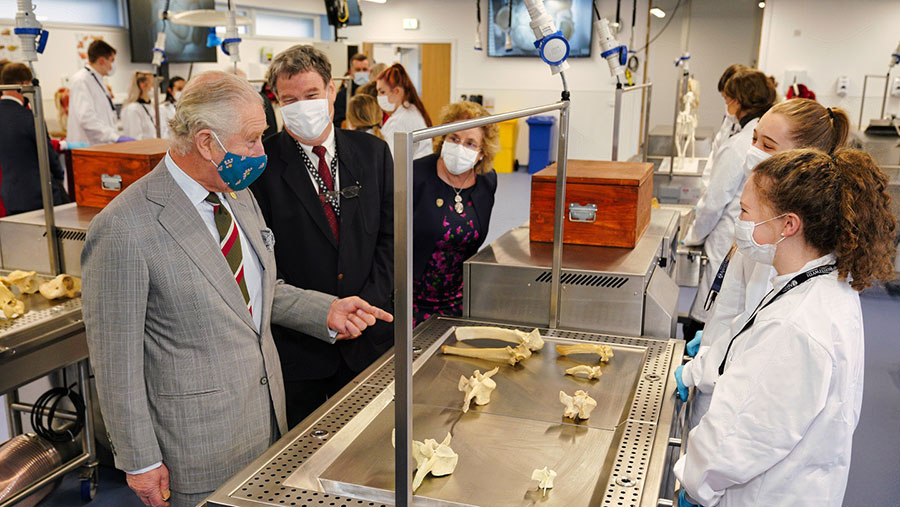 The prince, a former Aberystwyth student, toured the new Veterinary Education Centre and spoke to some of the students who began their studies in September.

It is hoped that the establishment of the school will benefit the country’s agriculture sector and rural communities in years to come.

After touring the centre on Friday (10 December), Prince Charles unveiled a plaque to mark the official opening of the school.

“I’m so impressed having seen what the school has done here and am delighted to have had a very small part to play in helping to open it,” the prince said.

He added: “I do hope [the students] will have great success in the future and the school will flourish.”

Prince Charles said he had “very special memories” of his time as a student at Aberystwyth in 1969.

The royal visitor was welcomed by Aberystwyth University’s chancellor, Lord Thomas of Cwmgïedd, and vice-chancellor Prof Elizabeth Treasure, together with the Royal Veterinary College’s vice-principal for learning and assessment, Prof Adrian Boswood.

Prof Treasure said: “Agriculture and its related industries play such an important part in the Welsh economy, and it is incumbent on us as universities to provide the people and skills that will contribute to ensuring they thrive for years to come.

“The school of veterinary science adds a vitally important new piece of the jigsaw, one that will build resilience in the rural economy through education and research at a time of great potential change and challenges.”

The veterinary students will spend the first two years at Aberystwyth University, followed by three years studying at the Royal Veterinary College’s Hawkshead campus in Hertfordshire.

The programme covers the full range of animals, from domestic pets to farm animals, in common with all other veterinary programmes.