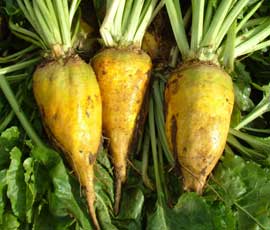 Livestock producers could achieve increased yields of fodder beet worth up to £98/ha according to results from a trial carried out by Limagrain UK.

And according to Limagrain’s Martin Titley, this increase in yield is worth £98/ha for Blizzard and £61/ha for Robbos (based on the relative value of fodder beet at £122 a tonne of dry matter).

He said Blizzard, a winter hardy white-skinned variety, offered growers greater harvesting flexibility and can be lifted from October through to February. While, growers are recommended to use leaf lifting machinery for Robbos, a variety which produced 19.3 tonnes of dry matter yield a hectare in the trials, with 23.7% DM content.

“Our trials produce a valuable resource for farmers to identify the best varieties for their farming situation,” added Mr Titley.

“Fodder beet has risen in popularity over the past two years: it can be harvested from the field, or left in situ to provide winter grazing for sheep and cattle. It is an excellent feed ingredient to balance high starch rations such as maize, as it is high in sugars. It is also extremely palatable.”