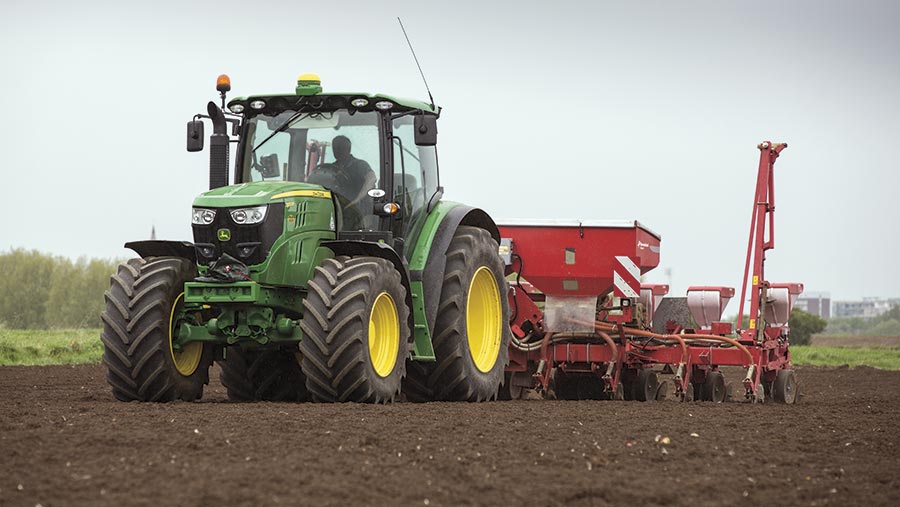 Achieving uniform emergence when growing maize is key to the final yield and quality of the crop. Jon Riley spoke to Maize Growers’ Association agronomist Simon Draper to find out the answers to the main points underpinning a successful start to the crop.

Why is uniform emergence important?

Yield losses can be as high as 40% when maize crops emerge unevenly. The losses are caused by the earlier emerging, larger plants out-competing their smaller counterparts for sunlight, nutrients and soil moisture.

The result is a proportion of the crop having weaker stalks, less grain and smaller and fewer ears.

What are the main factors contributing to uniform emergence?

What is the ideal seed-bed to promote even emergence?

The ideal seed-bed condition changes according to drilling time, soil type and weather conditions. Growers tend to go for a finer seed-bed than is needed.

Surprisingly, a relatively rough seed-bed can be the best option, particularly earlier on in a cold season. A rougher and more open soil structure will be better drained and the seed will be less likely to sit in cold, wet ground, which could delay emergence and cause losses through rot.

As the season progresses, a finer tilth is needed to ensure moisture is retained around the seed to promote germination.

How do you tackle soil capping?

Avoiding capping is also key to even emergence. Capping occurs on some soils after rain, preventing some plants from pushing through the surface.

It is advisable on soils prone to capping to watch the forecast carefully and delay drilling for a few days until the showers have passed.

A delay to drilling will mean that with warmer soils, quicker emergence occurs and therefore there is a lower risk to capping.

Where capping is severe it is possible to use a hoe to break the soil, but care must be taken not to damage any plants that have already germinated just beneath the surface.

While it is generally recommended that creating a flat seed-bed will promote uniform emergence, it is more important to keep drill speeds down.

A drill that is driven across a field at too high a speed will bounce and skip across the surface causing variations in seed depths.

The effect is exacerbated by differences in soil temperature and moisture levels at different depths. Therefore, speeds should be kept to 7-8kph (4-5mph) across the field for conventional maize drills.

Is there an optimum drilling depth?

One area that maize growers often overlook is adjusting the seed depth to match conditions. It is important that seeds are drilled into the moisture layer so it is worth digging down to establish where the level lies.

For heavier, moist soils, depths as shallow as 4cm (1.5in) can be optimal. In drier, warmer soils, depths up to 7cm (2.75in) may be needed to access the moisture, particularly in years where rainfall is below average.

How does the drilling date affect emergence?

Drilling at the right time will mean more seeds are stimulated to germinate simultaneously.

While the optimum drilling time is usually late April to mid-May, it is better to base the decision on a compromise between soil moisture, temperature and the weather.

Soil temperatures must reach 8-10C at 9am for at least a week across the whole field. Once this has been recorded it is advisable to go ahead regardless of the date.

Leaving the operation later could mean areas of the field start to dry out as the season moves on. The caveat is to keep one eye on the weather forecast, because a sudden unseasonal cold or wet weather period could result in seed losses.

What are the major pests that can attack the emerging maize plant?

Currently seed dressings prevent many of the pests and diseases which we encounter in the UK. But the main pests to watch out for are leatherjackets (Tipula paludosa) and wireworm – the larva of click beetles (Elateridae).

Maize fields that follow grass are vulnerable to wirewom attack, particularly in the second year after ploughing. In the first year, there is often enough grass trash left in the soil to occupy the wireworm population.

But in the second year the pest is more likely to target the germinating and young maize plant causing patches of uneven emergence across the field.

Look at the field history and monitor soil to establish a risk. It is advisable to use a standard seed treatment like Mesurol.

A word of caution is that these treatments may be withdrawn next year and the situation will then become more difficult to control.

When should you re-drill if emergence is uneven?
Generally, even when plant numbers fall to as low as 60,000/ha there will still be a very valuable crop produced. The increase in space around each maize plant will stimulate it to produce more cobs.

This means that although there will be less bulk from the vegetative part of the plant, the energy value of the crop will rise.

The advice then is to avoid re-drilling unless plant numbers dip well below 60,000/ha. When this is the case it may be possible to drill between the rows at half the level of the original rate.