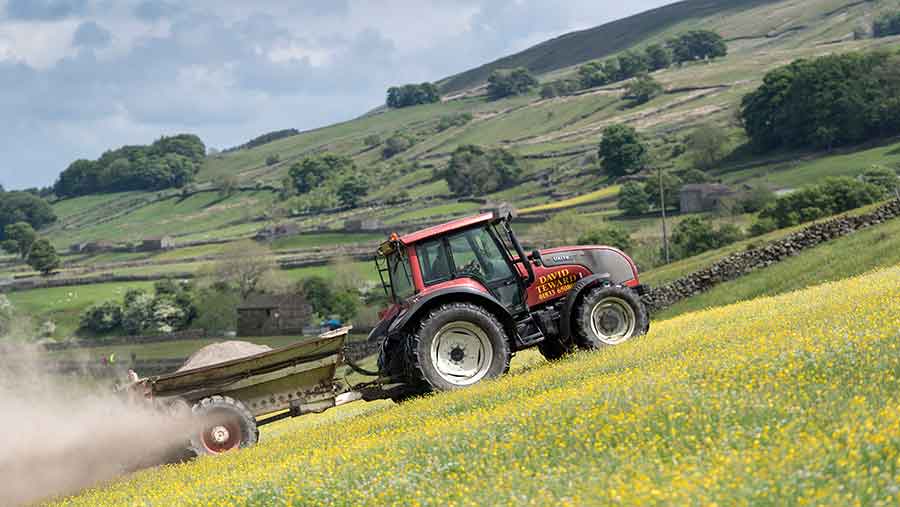 Soil acidity is one of the most influential factors in forage production, yet many grassland farms are losing grass yield and quality because they are failing to apply lime.

David Wall, a soil scientist at the Irish agriculture body, Teagasc, says it is good practice for grassland farmers to lime up to 20% of their land annually to achieve a target pH of 6.3 and redress lime losses and acid build-up, which mainly occur through drainage water.

But many farmers don’t take this step – meaning their soil is too acidic to unlock its full potential.

However, much higher losses can occur in soils that have a low pH in combination with a low soil test phosphate and potash, says Dr Wall.

See also: The 1,400-head dairy grazing all year round

“Approximately 60% of soils have sub-optimal pH levels and that is costing farmers dearly in terms of crop nutrition and lost yield.’’

Why is lime such an important material and what is its role in soil health and function?

Lime is a soil conditioner and corrects soil acidity by neutralising acids, allowing the micro-organisms and earthworms to thrive and break down plant residues, animal manures and organic matter.

In so doing, stored soil nutrients are released for plant uptake.

Newly reseeded ryegrass and clover swards will establish and persist for much longer if soil pH is at target level.

How often should you test soil pH?

Usually every three to five years, but more often if you are trying to address pH changes in the soil or in fields where acidity is known to occur. However, it is also important to give the lime sufficient time to work before retesting limed soils.

What index is good?

To achieve maximum yield and quality from ryegrass and clover swards, the ideal pH is 6.0-6.5 for mineral soils and 5.3-5.7 for peaty soils.

How can lime rectify deficiencies?

Liming acidic grassland soils can release up to 80kg/ha of nitrogen from organic matter pools, as soil biological activity, including earthworms, usually increases and mineralises organic nitrogen when the soil pH is higher.

This phosphorous is not lost and lime applications will unlock these stored nutrient reserves in the soil.

However, where magnesium is deficient, magnesium limestone is an effective treatment.

How much lime do I need?

A soil test provides the most accurate lime application recommendation.

Clay soils need more lime than sandy soils to raise pH by 1 unit – apply at a maximum of 7.5t/ha (3.0t/acre) in one application

If more lime is recommended, apply the balance after two years.

Sandy soils will need lime on a “little and more often” basis, so regular soil sampling is key.

When is the best time to apply lime and what state should the ground conditions be?

Lime can be applied at any time of the year but mid-summer and autumn is an ideal period as soils are drier and firmer.

There are more spreading opportunities after silage and when the grazing rotation is extended later in the season.

There is also less interference with slurry or urea nitrogen fertiliser applications later in the season, therefore minimising nitrogen losses through volatilisation.

The evaporation of a volatile herbicide. The effect of gaseous chemical is lost at its intended place of application and may move downwind and affect other plants not intended to be affected causing crop damage.

Can lime and slurry be applied at the same time?

Slurry application should be avoided for up to three months after lime during drier periods and the same goes for urea fertiliser.

If slurry or urea are applied first, there only needs to be a gap of 10 days before spreading lime.

Heavier and organic matter-rich soils may poach more easily after pH correction with lime because of the rapid breakdown of organic matter.

On these type of soils, apply a reduced rate of lime on a regular basis instead of one large application.

How quickly can I graze a limed field?

With ruminant animals, fields can be grazed as soon as there has been a shower of rain and the lime has been washed to the base of the plant. For grazing cows, lime residues don’t usually cause any problems.

With sheep, because they graze down to the butt of the plant, they could be prone to scouring if they are turned into a field too quickly because the lime ingestion may counteract with what is happening with the low pH conditions in their stomach.

It is therefore advisable to keep sheep off for a full grazing rotation – around 30 days – but in areas with higher rainfall grazing can restart sooner.

When soils are acidic, they can make the herbage taste sour because the acids in the roots are being drawn up through the plant. Correcting soil pH through liming will help sweeten the grazing sward and make it more palatable.