For the past four years, arable farmer Ralph Parker has been including 150 acres of turnips in his rotation to provide winter grazing for sheep farmer Rob Hodgkins.

With limited access to quality grazing ground, this provides Mr Hodgkins with a dedicated finishing crop for lambs, enabling him to save costs and maximise production from forage.

So how does the arrangement work?

Why did you decide to work together?

Rob Hodgkins: All of our land is rented, with most of it in HLS with minimum to low inputs, so the problem with our system is having access to quality land for finishing lambs, especially as we have grown numbers.

Working with Ralph gives us access to a dedicated finishing crop.

Ralph Parker: We grow quite a lot of spring crops. Barley is cut in July which means ground wouldn’t be drilled with sugar beet until March, which is a long time to keep ground fallow.

The theory was we could get turnips established after winter barley which would help capture any nitrogen left over from the previous crop and avoid environmental issues. We’re also trying to keep things growing for as many months as possible to stop the soil slumping.

It makes sense if you’ve got a cover crop to graze it if you can. We’re on a low rainfall site with free-draining chalk [soil] which means we’re ideally suited to outwintering.

Organic matter is also inherently low in arable rotations. The organic matter provided by the sheep is key and helps with moisture retention. The sheep also convert the turnips into a more readily available form of P & K.

Who’s responsible for what?

RH: Ralph phones up in late spring/early summer and asks how many acres we want for the year. He’s then responsible for drilling, spraying and planting the crop.

We literally turn up and there’s a big crop. Ralph is the expert. He’s more knowledgable than me so I leave it to him.

RP: I choose the variety. Rob likes leafy-type turnips so I tend to pick them. We direct drill them within a day or two of the combine, generally around mid-July to the start of August.

We tend not to put nitrogen on as there’s enough residual nitrogen form the previous crops to get a decent crop of turnips. If there’s a lot of volunteers, we may spray them out. I’ll tell Rob where they’re planted and then Rob monitors it to see when it’s ready for grazing.

RH: We generally start grazing around the end of September. We put in 1,000-litre trailed water bowsers and mobile electric fencing to split it up. We’re responsible for everything to do with the sheep. 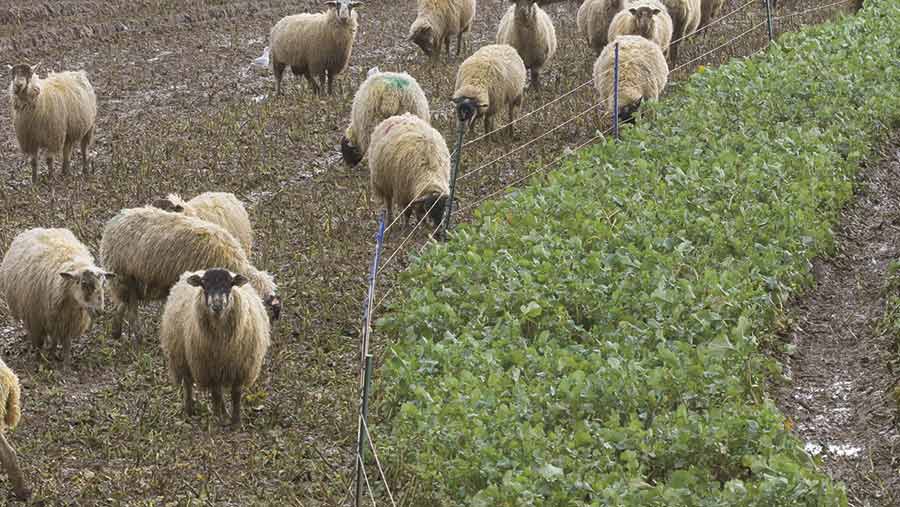 Do you have a set contract?

RH: No, it’s a gentleman’s agreement. We just have to be off in mid-February so Ralph can start with the next crop. It’s about being courteous and sensible, as we want the relationship maintained.

We like to leave the soil in reasonable condition and put in weekly breaks. We try not to graze it right down so when we leave, it’s not trashed.

RP: Rob pays me roughly what it costs to grow the turnips with a little bit extra. It’s not a huge amount.

Which stock are grazed on the turnips?

RH: This year the crop has been pretty much exclusively used for finishing ram lambs. As our grass management has got better over the past four years and we’ve taken on fields not in HLS we have access to better ground so the ewes recover better from lambing.

That means we need less turnips to improve body condition. We still put some “golden oldies” on the turnips and ewe lambs, but it’s predominately for finishing lambs.

What are the main benefits you’ve seen?

RH: Turnips are hugely cost effective. We didn’t feed a bag of concentrate this year to anything and we averaged 20.9kg dead weight at R3H, predominantly finished off turnips.

If we didn’t have them we’d have to find something else and either rent arable or put better grass leys in or creep feed.

RP: It’s hard to say if there’s been a yield benefit to the subsequent crop after turnips as there’s so many variables, but our sugar beet yields are definitely going up.

I’m not sure if it’s benefited soil indices, but it’s got to help. Some of the ground the turnips are on is in HLS so I’ve also been able to get extra payment for having sheep on there.

What lessons have you learnt over the last four years?

RH: Timing makes a huge difference. You want to follow the combine with the drill. Two years ago, we took on some of our own arable land, but it’s very heavy and not suited to out-wintering so we’re restricted on the total acreage of turnips we can grow.

This was the first year we drilled turnips on our own land, but we put 60-70 acres in too late at the start of September so 25 acres wasn’t successful.

RP: We have planted turnips and it’s been dry and nothing’s grown so it doesn’t always work. That’s my risk as Rob won’t pay if he can’t put sheep on them.

Tips on setting up a sheep/arable arrangement