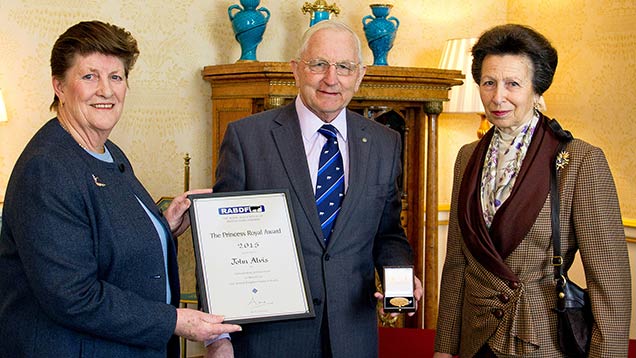 John Alvis, with his wife Pauline, receiving his award from Princess Anne.

Lye Cross Farm director John Alvis has won the Royal Association of British Dairy Farmers (RABDF) Princess Royal Award for his outstanding service to the industry over the past 50 years.

Mr Alvis, who heads his family’s 1,620ha farm and cheese-making business, Lye Cross Cheese, in Redhill, Somerset, was presented with the award by Princess Anne at Buckingham Palace on 3 March.

He followed his father into the business in 1960 and now manages the farm’s 680ha of arable, a 1,200-head dairy cow enterprise that includes 250 that are farmed organically, 18,000 pigs and 600 beef cattle with his brother Michael and sons, Johnny and Peter.

“I think in the long run we would be better off [without BPS]… getting one’s return from the market is more sustainable than getting it from subsidy.”
John Alvis, director Lye Cross Farm

The business also sources milk from 30 local suppliers to produce 4,000t of West Country Farmhouse Cheddar a year, which it sells to UK retailers and exports to 35 countries.

Following presentation of his award, Mr Alvis spoke with Farmers Weekly about the state of the dairy industry, TB and the prospect of Britain leaving the EU.

On the EU referendum…

“It’s extremely difficult for most of us to make a reasoned decision as to how we should vote. If we could get some clarity on what life would be like after the referendum – whether in or out – I think we could all then come to some decision.”

On the prospect of Brexit…

“I’m afraid agricultural production does not feature very highly on our government’s list of priorities.

“I think we would see a big shift away from any agricultural support, so I think we would very quickly have to get used to no BPS, which I’m not necessarily against, as I have always viewed that I would sooner get my returns from the market than I would from subsidy. But it would take time for the industry to adjust, to slim down enough to operate without them.

“I’m quite sceptical that our government will do anything to protect our agricultural supply situation.

“In theory, exports shouldn’t be hindered at all as the EU exports more to us than we export to it. In practice, it all depends on whether the government trade one advantage for one disadvantage and what the Europeans are looking for.”

“I think in the long run we would be better off [without BPS].

“Even though we have gone through this enormous volatility over the past 18 months or so, in the long run I think getting one’s return from the market is more sustainable than getting it from subsidy.”

On the milk price crisis…

“I have never seen such a rapid downward movement. We have seen more than 30% knocked off the price inside 14 months, or something like that. It’s phenomenal. I have never seen something quite so drastic as that, and I don’t know that we have seen the end of it yet. From where I sit, the clouds still look pretty dark.

“What we have to recognise is that it is not just the UK we’re talking about. We operate in a global market. What we do here is almost insignificant. Until the global demand-supply imbalance comes back into kilter, I can see this problem continuing.

“Our opportunity is our domestic market isn’t it. I know it is open to world supply, but we ought to be doing a better job on holding that domestic market for ourselves. Having said that, I also believe we need to pursue our export markets as well. We’re in a world market; we have to play like world market players.”

“It is an issue for us as a processor and a milk producer because we have one herd that has been devastated by it.

“Everyone in the South West is at some time under TB restriction, and I guess those that do decide to get out of milk will to a large extent decide when they go by virtue of their TB status.

“If they have two clear tests, some of them will get cows out at the market as soon as they can. Whereas if they have to sell them under restriction their market is considerably narrower and more depressed.”