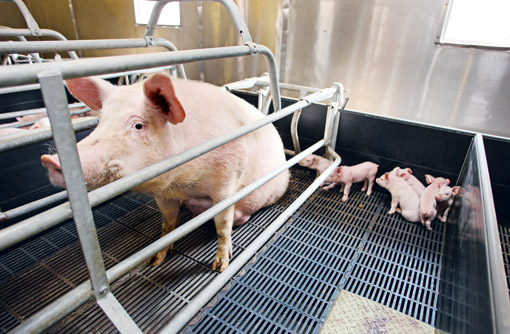 Pig producers are making real changes to improve welfare standards after getting involved in an initiative that identifies issues in their herds.

The Real Welfare project, led by BPEX and involving vets, university researchers, the RSPCA and pig producers, gives pigs a welfare score based on actual evidence, from the level of tail biting and body lesions in a herd to lameness and environmental factors.

It is the first time baseline welfare data has been available for the UK pig industry.

The appraisal is based on science rather than human notions of animal welfare, explains Nina Taylor, of BPEX, who led the research.

“Until now producers have not known what normal is, but they now have the ability to benchmark themselves against other producers,” says Dr Taylor. “On welfare grounds we can show the rest of Europe how well we are doing.”

How the initiative works

About 157 units have been involved in a pilot project with vets undertaking Real Welfare audits during routine quarterly farm visits they make for advisory and assurance standard purposes.

Audits are taken four times a year so additional farm visits are not necessary, with each vet inspection taking between one and one-and-a-half hours.

Prior to visits, vets randomly assign sheds, rooms or pens for inspection so that any issues that may crop up during a “standard” visit do not affect pen selection for the Real Welfare audit.

Results from the pilot study highlighted some interesting areas, with the level of vulva bitings reported to be higher than expected, explains Dr Taylor.

“We had believed vulva-biting lesions was more of an historical problem but it was certainly an issue on a few units. It demonstrates the need for knowledge transfer on the use of electronic sow feeders.”

Another surprise was a lower than expected incidence of tail biting. “We were surprised at how low this figure was because tail biting has been flagged up as a big problem. The situation is better than we expected but despite that we will focus on reducing that figure even further.”

When vets undertaking a Real Welfare audit identify units with a problem they work with the farmers to address it. Dr Taylor says there are obvious production benefits that can be achieved by improving welfare. “When there is a problem it is inevitable that production will be lower,” she adds.

BPEX is continuing to develop the pilot study into a welfare system for the whole pig industry and is also collaborating with the RSPCA, University of Bristol and the Soil Association to contribute towards Assurewel (an outcomes-based assessment scheme across a wider range of livestock) BPEX is currently investigating a means of collecting the data electronically on-farm to allow rapid and cost-effective analysis to feed back to farms and into an industry database.

Meryl Ward runs 2,000 breeding sows in Lincolnshire and is one of the pig producers involved in Real Welfare.

She is convinced the assessments mark a watershed in moving welfare forward, matching consumer expectations to proving good welfare at a farm level.

“The data collected has been shared with producer groups and the industry bodies culminating with a presentation to the Red Tractor technical committee, who have agreed that it will become part of on-going farm assurance,” says Mrs Ward, a BPEX research and development committee member.

Her farm supplies several processor outlets and the farm’s own shop. She says Real Welfare had been an ongoing learning curve for all involved. “At farm level, it provides a demonstration of on-going improvement, data to help inform management changes and proof of good welfare irrespective of system.”

Mrs Ward believes it will help demonstrate the pig sector’s welfare credentials when it is rolled out industry-wide and could provide a benchmarked incentive to change.

“I genuinely believe that this is a practical way forward,” says Mrs Ward. “We need to demonstrate that not only are our animals physically fit but that we are also taking care of their behavioural needs through good stockmanship and promoting positive experiences for our livestock.

“Welfare outcomes are a means to allow the pig farmer to do this while getting away from the emotive debates that have tended to surround welfare discussions to date.”

This year the Livestock 2012 event taking place on 4 and 5 September has specialist pig seminars. Find out more about Livestock 2012