Norway has the world’s highest level of cow fertility – its national herd’s calving interval is 373 days at a conception rate of 60%.

Shropshire-based vet Dan Humphries of Lambert, Leonard and May, has been on a fact-finding mission to the Scandinavian country to discover what UK milk producers could learn from the successes achieved in the country’s 8,000 herds.

He says his tour gave him a lasting impression of a data-hungry dairy sector where the meticulous collection of information from more than 95% of the country’s cows has had a massive impact on the breeding and management decisions made by Norwegian dairy farmers. 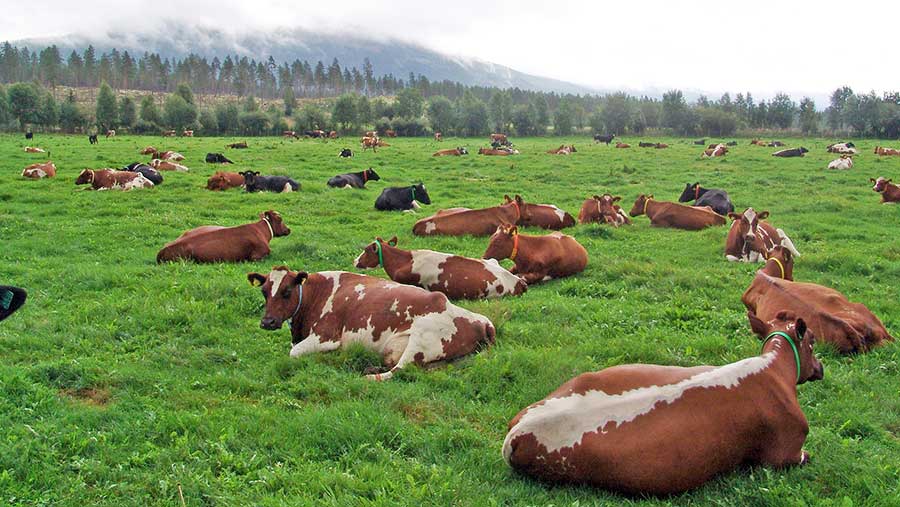 “With a national average yield of 7,900kg at 4.2% butterfat and 3.4% protein, Norwegian dairy herds are similar to the UK in terms of national levels of production. ”

“But after 40 years of detailed record-keeping for every individual cow throughout its entire life, Norway has achieved an enviable level of fertility, healthier cows and a system where veterinary treatments and medication are at a very low level,” says Mr Humphries.

Almost all Norway’s milk is sold through farmer-owned co-operative Geno Norway. The milk price is subsidised by the government, with farmers currently paid 50p/litre.

The co-operative approach underpinning Norwegian dairy farming has not only enabled a vast database of individual cow records to have been built up over the years, but it has also ensured all the information collected has been evaluated and used to maximum advantage as a vital tool for improving cow health and fertility, says Mr Humphries.

“The fertility performance of the national herd makes for impressive reading,” says Mr Humphries. “The current recorded calving interval is 373 days, with a conception rate of over 60%, even though average milk production levels virtually mirror those of the UK.”

And he attributes much of the success to a “robust and selective” national breeding programme, the result of four decades of work by Geno Norway.

The Norwegian Red is the country’s dominant breed, accounting for about 92% of all dairy cows. About 40% of cows are milked by robots, giving Norway the world’s highest rate of robotic milking.

“Everything the Norwegians have achieved is based on the records they have kept. There are undoubtedly lessons we can learn from that.

Everything the Norwegians have achieved is based on the records they have kept. There are undoubtedly lessons we can learn from that

“But most importantly, the farmers make use of the data they record and base breeding and management decisions on it – that’s a key reason for their success.

“Norway put health and fertility at the top of the list in terms of traits it wanted to improve.

“The fertility trait is not particularly heritable but because it has been prioritised for so long, and over such a large number of cows, significant improvements have been made,” says Mr Humphries.

Norway also leads the way on medicine use. Figures show that UK farmers are using 51mg of antibiotics for every kilogramme of liveweight produced. In Norway that figure is just 4mg.

All cow medication treatments are recorded at farm level and maintained on a national database of individual animal health cards.

Every cow treatment must be delivered by a vet, but this is not quite the onerous task it may seem because on-farm vet visits are rare.

It has been a critical element of how Norwegian dairy farming has been run since 1990. When data recording started, the 1990 figures showed the average number of medical treatments administered to Norwegian dairy cows was 1.4/year – still low compared with the UK.

But over the past 26 years that figure has been reduced to 0.4 treatments a year.

And as part of Norway’s committed focus to improve the health of its dairy cows, one of the management protocols addressed in recent years concerns the reduced use of antibiotics.

Vet Dan Humphries says the Norwegian dairy sector has been totally committed to improving the health of its cows: “Very strict biosecurity protocols and successful eradication schemes for major diseases have meant vaccines are now rarely used on farms.” 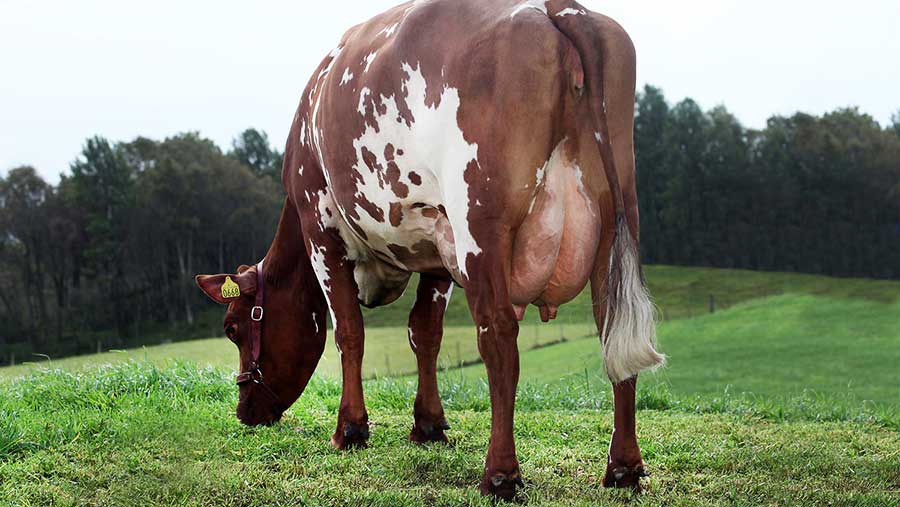 How the UK can improve

While he acknowledges plenty of on-farm data is collected on UK dairy cows, he says that in reality the best use isn’t always made of it.

He is realistic when he says the Norwegians’ regimented approach to national data collection is unlikely to ever be matched in the UK, but firmly believes that as a role model the system proves there are significant benefits that individual UK herds could achieve by improving data collection and use.

“So many farms in the UK don’t use the data they collect. The information is there but it’s not acted upon. Management decisions made in any dairy herd are only as good as the evidence that’s behind them.

“Dairy farmers should certainly have a discussion with their vet about precisely what data they collect as part of their routine management. They should decide how it can best be evaluated and then acted upon for the long-term benefit of the herd’s performance.”

Bjørn Saetren’s herd of Norwegian Reds achieve virtually 100% fertility from the first insemination and have a calving interval of 11.6 months.

The cows, which average 10,000 litres/year and are milked through robots, also boast exceptional health, receiving medication only once every two years.

“The reduction from 1.4 cow treatments a cow a year to 0.4 over the past 26 years has been achieved by strict selection and culling and using all of this data in the breeding programme of the Norwegian Red,” says Mr Saetren.

Like other Norwegian dairy farmers, Mr Saetren believes that making use of data on health and fertility has a direct benefit on his herd’s profitability.

“As farmers we cannot influence the milk price and won’t have any impact on it in the future. So we have to pay close attention to our costs of production linked to health and fertility and longevity,” says Mr Saetren, who adds it is not unusual for his cows to milk for seven to nine lactations.

Geno Norway is the farmer-owned co-operative that has been responsible for using health and fertility data in the national herd as part of its Norwegian Red cattle genetics breeding programme.

Tor Arne-Sletmoen of Geno Norway says it is the farmer members who have driven the genetic selection of sires with superior health and fertility traits.

“In the UK, where the Holstein is the main dairy breed, there has been more emphasis on higher milk yields than fertility and disease resistance.

“In Norway it has been the aim of farmers to reduce the number of visits by the farm vet and also benefit animal welfare by breeding healthier cows.

“For more than 35 years, resistance to mastitis, ketosis and other diseases has also been included in the health traits within the total merit index for the Norwegian Red.

“Fertility is a trait just like any other. When Geno Norway launched its index it was based on the highest number of daughters compared with any other breeding company across the world.

“So when we announce the index of a bull we know he has maybe 200 daughters compared with about 50 for some semen companies.”

Mr Arne-Sletmoen says the bigger the number of daughters the more reliable the index.

“And that is why we have achieved the current level of genetic improvement in the Norwegian Red. We can say that about 50% of the improvements we have achieved in Norway are through genetics based on 40 years of selection from the 95% of Norway’s cows that are in the milk-recording system, which is key for progressive breeding.

“Positive genetic trends for health, as well as production and fertility, have been possible due to the very comprehensive data collection system.”

And the improvement is continuing. The latest figures show Norwegian dairy cows are achieving an average 56-day non-return rate of 72.4%.