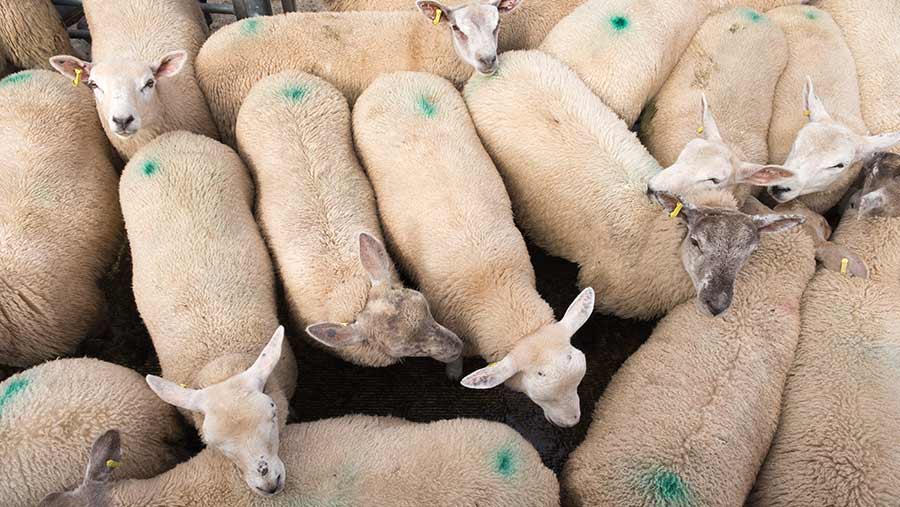 Prices were already on the up in February, lifting from a January baseline of 182-186p/kg to 209.4p/kg before Storm Emma and “the beast from the east” cut throughput 44% at Great Britain’s marts, taking averages to 215.44p/kg for the week.

With many marts reporting 40-60% lower volumes on the week, prices are £7-£8 a head dearer across the board with some centres reporting averages over £100 a head.

“A lot of store lamb buyers probably failed to see a margin last year, but this year they enjoyed lower prices in the autumn and a rising market this year, whereas last year hogg trade flatlined,” he told Farmers Weekly.

Bakewell’s Monday sales have been very strong but Bagshaws missed out on Thursday (1 March), having to cancel its Thursday sale as snow ground most of the Peak District to a halt.

Auctioneer Ivor Lowe said market forces were combining to result in an “astronomical” lamb trade, which many sheep feeders could not have imagined.

“Nobody buying store lambs a few months ago would have expected that in their wildest dreams,” said Mr Lowe.

“I thought our numbers of lambs would be up given the trade we have but that is maybe an indication of how adverse weather is still affecting people.”

Ross Collins, surveyor and auctioneer at Lodge and Thomas, says that bidders have been less selective when looking to secure lambs for the continent and have turned to buying lighter sorts (38kg-41kg).

“We have generally found people were willing to pay more for the heavier hoggs but more recently they have been prepared to pay a good price for the lighter ones, too,” he told Farmers Weekly.

However, some hoggs beat this on a per kilo basis, flying to 240p/kg at 40kg.

Mr Collins said trade has been strengthening since 10 January, with prices up 35p/kg to average 225p on Wednesday (28 February) with little idea as to when the NSL trade would kick off properly.