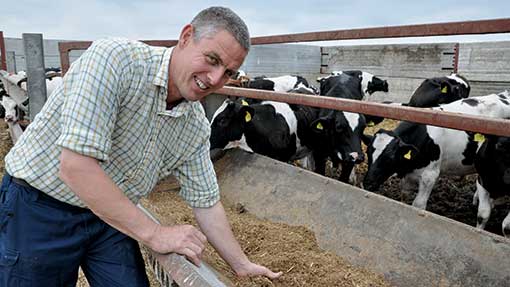 Producing a consistent supply of cattle at the required carcass quality is a vital part of one Lincolnshire beef business, which relies on hitting a target carcass gain of 0.6kg/day.

Back in 2009, Gary Allis joined the KW Compass Programme with his stockman Nick Casswell. They worked closely with KW’s Michael Marsden and Stuart Duff, along with the farm’s vet, to completely overhaul beef production at Furze Hill Farm, near Alford.

“Detailed monitoring of the cattle from start to finish has been a vital part of that process, and we’ve now got the data to really see what’s going on,” says Mr Allis.

“It’s been a team effort to record and analyse the data. Building and installing a bespoke and efficient cattle-handling system, including a weigh crate, was definitely one of the best investments we’ve made.

Calves – sourced mainly through Adam Buitelaar – come from a number of different dairy farms, but analysis of the data has shown it’s the age of calves when arriving on the unit and how quickly they’re finished, not source or breed, that determines performance.

Put simply, the younger Gary can get hold of the calves the faster they grow. “We used to purchase some cattle up to six months of age, but previous management and feeding was largely unknown,” Mr Allis explains.

“The figures show we need to focus on three-week-old calves at 50-60kg liveweight, and aim to have them finished at 450kg liveweight by around 11 months of age.

“Beyond that, we see a marked drop in carcass gain, much lower than the target of over 0.6kg/day we’re aiming to achieve for all cattle.”

To cope with the change in focus, the calf facilities are being updated to better accommodate the 60 calves that arrive each fortnight. The aim is to finish a similar number of cattle over the same period.

The changes include adding concrete walls to separate the calves and concreting the front floor of the pens to ensure water drains away.

Crucial to success is the need for both consistency in terms of cattle output and a close working relationship with Mr Allis’ buyer, Adam Buitelaar.

“We need to be able to better predict when cattle will be ready so Adam can place them with his customers,” Mr Allis highlights. “The alternative is to spot sell any extras, or keep them a few more weeks.

“Neither is ideal, and if they get beyond 475kg liveweight, they quickly go long in the leg and back, and the feed conversion tumbles.  At that point much of the profit has gone.”

To maximise growth rates, all calves receive generous amounts of additional milk powder after arriving on the unit, along with a conventional calf pellet that is then replaced by a moist grower ration by four months of age.

Using similar ingredients as the finisher ration (see above), the moist grower ration also benefits from the addition of some high-quality protein in the form of rumen-protected soya bean meal, plus a live yeast to help optimise rumen function.

“Compared with the previous dry grower ration, we’re now getting much less sorting in the trough, and much less of the acidosis that it used to cause, which would often knock the calves back,” Mr Allis adds.

At seven months of age, cattle are switched on to the finisher ration, where the focus is on energy intake, and protein content is dropped to about 13% to minimise the number of carcasses grading 1, and sometimes even lower.

“This is when we can manipulate the carcass, aiming for a balance between maximum growth rate and conformation,” Mr Allis states.

“It’s a critical time, and as cattle get near to finished weight we monitor them very closely, as we know we can lose money if we miss that 450-475kg liveweight window.

“So far it’s paying off, and we’re now getting more than half the animals averaging over 0.6kg/day carcass gain,” he says.

Handling system is key to weighing