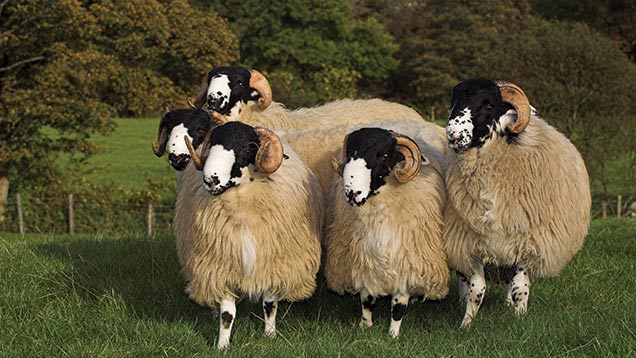 One of the UK’s largest hill sheep breeds – the Rough Fell – is seeing growing interest among Cumbria farmers.

Flockmasters in Cumbria believe the frame and shape of Rough Fell sheep is driving demand for the Mules among commercial producers.

Although ewe size and its effect on flock margins continues to be an issue for debate, the strong conformation of Rough Fell Mules is considered an asset.

The Rough Fell is one of the UK’s biggest hill sheep, but is still relatively unknown outside Cumbria.

One of the breed’s characteristics is its heavy fleece and its reputation for producing high-quality manufacturing wool with an average fleece weight of 2.7kg.

Adam Williams is building up stock numbers on his holding at Sunbiggin, Orton, Penrith. Alongside his suckler herd he’s running just over 100 commercial ewes.

This year he has been impressed with the performance of prime lambs bred out of Rough Fell Mule hoggs.

“When I bought the Rough Fell Mules last autumn I wanted gimmer lambs that would take the tup. I was impressed by their size and frame.

“Although I wanted to lamb them as hoggs, I needed to lamb them with the rest of the ewes in March and not still have to be lambing in April and later,” says Mr Williams.

He says the hoggs tupped well and scanned at 169%.

Twelve weeks before lambing he started to feed the twin-bearing hoggs with 0.75kg of an 18% concentrate a day and carried on feeding after lambing for about eight weeks.

“They were easily lambed, the ewes had plenty of milk and mothered well. And when we took the wool off them at shearing time we were struck by how well they’d grown, even though they’d suckled lambs,” he adds.

“The grade sheets showed nothing was below R3L, but there were some good U-grades among them too,” he says.

Mr Williams says he doesn’t want narrow-backed commercial ewes, but instead wants a ewe with some frame she can pass on to her prime lambs.

Farmers Brian and Jayne Knowles of High Borrow Bridge, Selside, are breeders of Rough Fell ewes and finish all their Mule wether lambs mostly off grass.

They say because of the size they inherit from their dam they can get wether lambs to 44kg very quickly.

“And if we have to trough any later on in the season, we find them so good to feed and finish,” says Mr Knowles.

Provided he has enough ewes to produce his replacements, he puts the rest of the flock to the Bluefaced Leicester to breed Mules.

“The Rough Fell is renowned for its heavy fleece, so as we develop this Mule market we do need to bear that in mind when we’re selecting tups for crossing. Tups must have as fine a skin as possible, but still retain good carcass qualities.

“We’ve got to make sure we get the skins right on these Mule gimmers, but we’ve certainly seen a lot of interest from sheep producers – and it’s the frame and the shape that they’re looking for.”

Even with this season’s depressed prime lamb market, lambs out of Rough Fell Mules have been holding their own.

“We sold late March-born 40kg Texel cross Rough Fell Mule lambs last week and they made £57, but that was only £1 behind other lambs at the market out of Texel-cross ewes.

Mr Knowles starts to sell his Rough Fell Mule wethers from September onwards. “We sell nothing under 40kg. They all go off grass until we start putting some of the later lambs inside for finishing in November. They take to the trough very quickly and we can start to draw from them within two to three weeks.”